Wilmer "Azul" Guzman is a character role-played by WildJing.

Azul is a latino sicario born in Nuevo Laredo, Mexico. Having lived in a drug ruled neighborhood by the local cartel called Los Zulus , Azul was able to join the cartel and learn the ways of the Sicario and eventually assist with the smuggling operations. Having lived in the streets and being part of a drug cartel Azul has a large bag of tools at his disposal that makes him a very dangerous and unpredictable man.

Azul was born as Wilmer Guzman, named given by his father Joakim who was a laboring mechanic barely making enough to bring food to the table for the family. Already at age 11 he started helping around his "barrio" in Nuevo Laredo in order to make some money, close the the US-Mexico boarder, a local low level cartel member gave Wilmer a few extra pesos for him to be the "eyes" and signal to other watchers in the neighborhood when police, a rival member or an unknown is entering the barrio.

The local cartel Los Zulus noticed that Wilmer was very careful and always picked the best locations to be the eyes so they decided to give him and his family some extra cash in exchange for him moving and selling some packages of marihuana to the "local market". So by the age of 13 Wilmer was already dealing drugs and had a small crew of 4 people that helped with the transactions. Wilmer always liked the color blue that even all his crew wore blue and you would never find Wilmer not wearing blue, so much that the entire barrio gave him the nick name AZUL.

For several years Azul was able to build a reputation for selling marihuana now with several crews increasing his profits and having enough muscle to take care of his competition in the most brutal and terrorizing ways that it would make other dealers think twice about coming to Azul's spots to sell drugs. Los Zulus had seen good potential in Azul so they recruited Azul and increased his salary in order for him to become a Sicario.

The Sicarios are the elite hit squad of the Cartel and in this branch of Los Zulus they are very militarized in their training. So Azul was brought in and spent several months in training under the sicarios learning everything from: following people, kidnapping, executing, reading plates, human psychology, torture, shooting, etc...

After each training session, at night Azul and his sicario brothers would go to the local bar and have a few drinks and that is when Azul fell in love with Lupita. A beautiful Mexican woman who was serving alcohol, the problem was that she was 18 and Azul was only 17. This did not stop Azul from perusing her to which eventually both would fall in love and end up being married.

At this point in his life Azul was doing good, until Lupita let him know she was pregnant. After the first child Azul saw how expensive everything got so he needed to make more money to keep up with the lifestyle he had shown Lupita. So Azul went to "El Jefe" and asked if he could get a promotion as he was a new father and needed money. El Jefe agreed and besides being a sicario Azul was given the opportunity to help protect and move the Cocaine from Nuevo Laredo to Texas. This new opportunity brought a lot more money to Azul that him and Lupita had two more children and then again the finances became tight once again as Azul was giving the best to his family. Then the most unexpected thing happened… Lupita got pregnant again, this time with twins!

At this point in his life Azul started having major hair loss to where he was almost bald. Once again Azul approached El Jefe and asked if it was possible to get another promotion, and due to all the great work Azul has put in the Cartel as a Sicario and Smuggler El Jefe decided to send Azul to Los Santos to make sure that the pipe-line of distribution in Los Santos stays in tact while making sure the name of Los Zulus is respected in the streets. So Azul had to make the hard choice of leaving his wife Lupita and his 5 children in Mexico so Azul can go to America to make more money in dollars and send back to Lupita that money for the family.

After crossing the Nuevo-Laredo/Texas border using the under ground tunnel system the Cartel has built, Azul made his was to Los Santos with the look of a man who has purpose and desire knowing that if he does one mistake... either The Cartel or Lupita would have his ass. 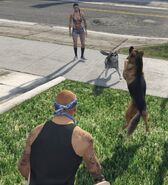 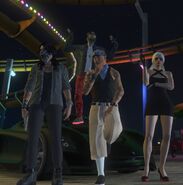 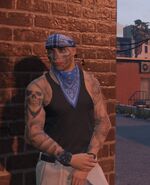