Shiki
Vivian Vale is a character role-played by Shiki.

Vivian's father was a guerrilla journalist. On her 17th birthday, she witnessed both of her parents dying in front of her. Her father had grown close to politicians, and he lost his life for his work. As a result, she was orphaned and had to move to a new city. From then on, she swore that she would become a journalist and follow in her late father's footsteps. After witnessing such a traumatic event, however, she began to suffer with PTSD, with a phobia of guns. As metamorphine hit the streets of Los Santos, her phobia of needles became more prevalent as well. The source of this fear is uncertain.

Vivian's fear of guns waned as she continued to work security in the city.

Though Vivian originally planned to be a journalist, her plans changed following a difficult encounter with a police officer. Hopes for being a journalist soon turned into wanting to be a private investigator (or possible hitman). However, that changed once again upon meeting Tony Corleone. While working security for the Dean World Burger Shot, Tony and Yuno Sykk appeared at the location to buy food. An argument between Vivian and Tony turned into a physical altercation, of which Tony pulled out a crowbar and "half-lifed" her, leaving her downed. He then fled with Yuno.

She and Yuno met once again at the Burger Shot's main location. Upon seeing him as she walked to the counter, she began to yell for the employees to "get him," as she had not forgotten the altercation whatsoever. Carrying him out of the building herself, a demand for answers and a shooting at the establishment left their friendship with a more mutual understanding. Later, she goes boosting with Yuno and Ray Mond.

Vivian was offered to sell coke for Stratum Knights Investments by Mickey and Yuno. She accepted. After successfully working under Mickey and Lang for a period of time, she offered to share information as well. This led to her being promoted to a partner during a meeting with Lang, Tony, and Mickey. Lang had his concerns, but she promised to not snoop; however, that was not a comfort to him.

Vivian assumed Lang hated her after their numerous meetings. One day, she is called to meet with them once again. With the tone the others used towards her, she assumed she had been correct. It ended up being a warning for her not to dig too deep for info, lest she find herself knee-deep in trouble or have to go into hiding. She is shot in the knees and left behind. (Their interactions afterwards seem to have no hard feelings.)

Following a slew of changes in the city, Oscar, Los Santos' cocaine connect, fled the city. Eager to continue proving her work to her bosses, she tested theories she thought could lead to the missing man. At the same time, beach balls began to appear across the city. She thought this could not be a coincidence. Her theory got a(n overly enthusiastic) thumbs-up from Mickey, and she got to work. The mission she gave herself was to find all of the beach balls on the island and centralize the points to one place; where Oscar was. Subjecting herself to hours of searching and, unfortunately, math, she finally found where he could possibly be. (It was not.) Eventually, SKI found out that he was gone out of the city temporarily, and he returned in a different spot. The effort was not unseen by her bosses.

Becoming a Part of the "Mafia" (Not Finished)

Despite their best efforts, after the rise of other drugs, cocaine sales were slowing down. Crack was easier to make and had stronger effects. Mickey wanted to continue having Vivian work under their associates. Tony "Half-Lifer" Corleone pushed guns, and she was introduced to him with then intent of being hired. She was eager to work for him, as their friendship had mended and he had helped her get a better car. 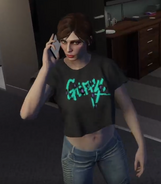 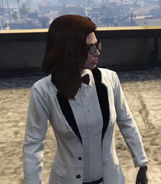