Vincent Glass is a character role-played by TheHexagonist.

Vincent Glass is a Senior Deputy for the Paleto Bay Sheriff's Office, Badge #327.

Vincent is a painfully optimistic people-pleaser and takes criticisms to heart. He's changed his hair color multiple times because other members of PD, especially Travis Tribble, didn't approve. He's also changed his hair style because his fellow COs teased him for his hairline. He's pretty sensitive, though he tends not to show it.

He tends to be a bit vain and cares a lot about outward appearance. He has a rigorous skin care routine and isn't afraid of getting pampered. His hair is usually coiffed and his facial hair is well-groomed.

He is usually a very loud character, raising his voice when debating or arguing with coworkers, friends, members of dispatch, etc-especially when he's trying to prove a point. He also uses voice volume to "assert dominance" to inmates; whether or not it works is still up for debate. He's usually very confident (sometimes overly so), but gets uncharacteristically timid around some superiors, especially in PD. (Example: When he attended Bodean Tucker's funeral, he spoke rather quietly and lowered the bass in his voice when he asked officers if he could ride with them.) 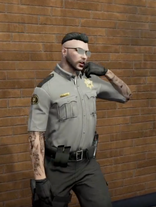