The Eastside Vagos (ESV) also known as the Vagos, is a Mexican street gang currently led by el Jefe, Arush Patel "Speedy" Santana. They operate out of the Barrio, based in the Jamestown area.

They are said to be the largest Hispanic street gang in Los Santos. The gang's main business revolves around pushing guns, drugs and various other legal and criminal activities.

Jesus began recruiting for the Vagos he recruited Lil Loco & Speedy. Jesus was the leader, until his untimely death.

After Jesus' death, Lil Loco took over as El Jefe. His time as leader of the Vagos was short-lived, as he mysteriously disappeared from the city shortly after. He would later return to the gang, with a new focus as a loyal soldier.

Speedy, the El Jefe of the new and "reborn" Vagos, began as a soldier during Jesus's time as the Jefe. After Jesus' death, Speedy was one of the few members that were left. The Vagos fell apart; past members had died, left the city or the gang entirely but Speedy took it upon himself to rebuild the gang to what it is today.

The Vagos mainland is the Rancho Projects commonly known as the Barrio, it is a large housing project located on Dutch London Street and Jamestown Street in southern Rancho, Los Santos. Members can be found in alleyways, back yards, and rooftops throughout Jamestown Street. 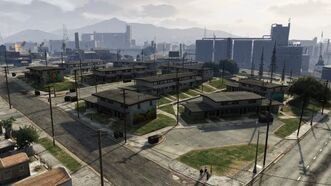 Vagos can also be located at La Fuente Blanca, a large ranch owned and occupied by Speedy and serves as planting grounds for Putos Frutos along the Senora Road in Vinewood Hills, just to the north of Los Santos. 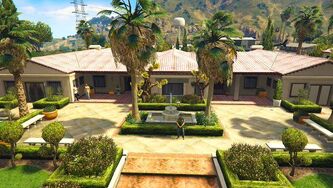 Vagos members are seen drinking, driving cars, hanging out in groups of 2-5 on the sidewalk, smoking cigarettes and marijuana and drinking Pißwasser. They are easily identified by their modern urban attire and yellow bandana. Although ESV is characterized as a largely Mexican American street gang, they also include members of Asian and European origin.

The Lion of the Barrio

Dust in the Wind

The Calm After the Storm

The Vagos successfully gunned down Buddha and Slim; and while the two men were bleeding out in the street, the police and EMS arrived at the scene. Speedy was not comfortable with the idea of the police interfering with gang war related situations. Speedy warned the police that they should not come to the Southside in the future.

Speedy ambushed the ambulance that was carrying Buddha and Slim, and drove to the North, where he spoke to the two men. Buddha was surprised and appreciative of Speedy saving them from arrest. Buddha, Slim, and Speedy agreed that their "beef"/war was over, and opted to form a new alliance. Moving forward, the Leanbois and Vagos often worked together, and continue to have a strong alliance.

Speedy and Marty have talks about how CG is growing and how they need to team up to ally together if war ever came because they are all basically family within this network web of the Cleanbois.

Rust and GG had a conflict over Zuck Cuc misunderstanding Marty Banks thinking he told him to never give up any loot to any other crew. Also Zuck shooting Gheto Kaiba. In a meeting of crews they agree to end conflict and to start an alliance together. Same day Speedy tells Raymond Romanov that him and Marty had previously talked about an alliance but now its extended into a 3 way alliance between Rust, Vagos, and Gulag Gang.