Tracy Martell is a character role-played by hobbittrash.

Tracy Martell is a Captain for the Los Santos Police Department, Badge #461.

Often referred to as "Dr. Bitch", Tracy was formerly a cosmetic surgeon at Pillbox. During her time working for the hospital she developed a reputation for being incredibly abrasive towards patients and co-workers. She despised working at Pillbox with such fervor that she'd frequently stand on the sidewalk by the entrance in hopes that she'd be kidnapped just to avoid being alone at the hospital.

Tracy later resigned and became a dispatcher to spite her ex-girlfriend, Nettie Machete - an EMS turned criminal, for being married to a man. Vowing to one day become Chief of Police and put Nettie in jail, forever.

After joining the BCSO, Tracy became close colleagues with Randy Wrangler and adopted many of his mannerisms after appreciating his style of police work. She at one time was even mistaken for Wrangler as she looked, sounded, and acted like him. She later transferred to LSPD due to department politics preventing her from being promoted.

In September 2021 Tracy was turned into a vampire by Carmella Corset, kickstarting her vampire ark.

In December 2021 she proposed a platonic marriage to William Gunner with a ring she stole from Randy Wrangler's PD locker. He accepted.

Martell transferred to the Los Santos Police Department on May 21, 2021, after realizing that being a deputy with the Blaine County Sheriff's Office would not further her career. And that she'd not be acknowledged for her achievements and, as a result, would not have been progressed. Afterwards, she submitted a transfer request.

Despite the fact that she received a lot of negativity from Sheriff Kyle Pred as a result of the transfer, she maintained her head high and demonstrated to everyone how good she could be. Demonstrating great leadership on several occasions.

Dean Quincy had become public enemy number one in the eyes of Martell. Especially after he had repeatedly lied to her about what he had been doing when she wasn't looking.

Martell was on a mission to capture the man and take everything she could from him. She gathered as much information and evidence as she could on the man and his accomplices. She knew they were in the illegal drug trade and had discovered blood at the scene of a violent shootout where she suspected they had a warehouse. With what she had, she planned a raid on them.

Quincy managed to get a phone call through to Guy Jones, informing him that they were about to be raided. Jones arrived at the warehouse soon after, but the cops arrived as well, and a shootout ensued. As a result, many cops went down in the altercation. But soon after Quincy and his associates were then taken to Bolingbroke Penitentiary to serve their time for their held until trial (the 9s). They were sentenced to 7 to 9 years in jail for Illegal Drug Trafficking.

With this Martell was able to lead the largest drug bust/raid in Los Santos at the time. Taking down NBC and Quincy.

From Senior Supervisor to Sergeant

Martell, like many other members of the force, had applied for the position of next chief of police. When Deputy Sam Baas discovered she was running for it as well, he approached her and offered her a high ranking command position with him if he won.

After some time had passed, Sam Baas was selected as chief of police. When he next approached Martell, he called her to his new office and told her that he sees her as a sergeant and believes she would be successful in that position. Baas then proceeded to forget what he had told her and said the same thing three times later. The last was with Domenic Toretti and Lance Malton, his newly appointed Assistant Chief and one of his Captains. Martel and Dante Wolf were both assigned to the role of Senior Supervisors (Shift Supervisors) and would be put on as trial Sergeants. The two would have to be watched for the sergeant post.

Martell was kidnapped by four men with voices that've been altered dressed in white lab coats, shorts and flip flops with black and white stripped socks on their heads on August 5th, 2021. They transported her to a remote location and warned her that because she was too sexy, they would have to kill her. As they pointed class 2s at her, they ordered her to turn away. They then removed their socks to reveal their identities as Malton, Toretti, Baas, and Shiesty, and promoted her to Sergeant.

Carmella Corset bit Martell's neck, transforming her into a vampire, on September 15th, 2021.

She carried on with her life, oblivious to the fact that she had been turned, and even went back to work the next day. Except for the fact that her appearance and system had changed. Her dirty blonde hair has been abandoned for dark reddish black. Developing a strong sensitivity to both sunshine and fluorescent lighting. Along with an aversion to garlic and an unquenchable thirst.

A shooting occurred one day while Martell and Gunner were riding together. Gunner exited the vehicle and began firing, but was knocked down in the process.  While he was down, he continued to make fun of Martell's condition, despite Martell's threats that if he continued to do so, she would bite him.  He continued, and she bit his neck, transforming him into what she was.

Martell eventually discovered (from Carmella) that she was a vampire, not someone suffering from Type 3 Diabetes.

The Day Martell Became the Chief

Martell anticipated she would be the next Ass. Chief. She shaved her head and dressed in an outfit that was similar to his. It was, however, one of those Baas thengz that got turned against Martell. Baas caved in and after some loud and messy sobbing he granted her the four stars by Chief of Police Sam Baas to be the chief, for the day, on October 28th, 2021.

All of this happened because Chief Baas hinted that if something happened to Assistant Chief of Police Domenic Toretti, she would take his place. Toretti was worried for a while that she might do something to him to get his rank, such as lying about his whereabouts, dressing up in a disguise and changing his voice.

K9 proved tough for Martell to obtain from Trooper Jack Ripley. She had previously claimed to hate animals, particularly dogs. Ripley didn't believe she'd ever want to get the certification in the first place.

Martell was serious about obtaining her canine. She thought it was something that would be valuable in her time zone. As there could only be two K9 certified officers on duty at the time, they were always busy with processing, court, or traffic violations.

Martell demanded a meeting with Ripley the day she become Chief, and she dragged Domenic Toretti along. After much discussion, they felt it was time to add a third handler to be on duty

Ripley told her to show up for the next K9 training day because he noticed she was serious about achieving her certification.

On November 6th, 2021, Tracy Martell got her K9 and named her Roxxane.

Martell and Ripley partnered up more often and would be on K9 duty at the same time. As a result, Zero and Roxxane would often work together.

One day Martell thought that the dogs were lonely and opened the gate to their kennels to let them hang out. After their first vet appointment, Martell got the news that her suspicions were true and that Roxxane was pregnant. Although Martell suspects that she had been pregnant since before she even got Roxxane.

Ripley who had been present during the appointment heard the news and began accusing Martell of negligence and not taking responsibility on his side.

The interactions between Martell and Ripley have always been interesting. Since they started riding together, they've cycled between flirting and fighting with one other. Martell wanted to make Ripley feel bad by telling him she had been holding a present for him after Ripley took back the diamond he had given Martell as a Christmas present for stupid reasons.

She went looking for Ramee in the hopes of obtaining Chang Gang merch, which Ripley would have appreciated. When she couldn't find anything, she considered the next big thing: Mandem merch. Dubbing them the Walmart version. Despite her multiple requests, Dean Quincy was unable to provide her with a chain.

Finally, she came up with the idea of rummaging through her colleagues' lockers for anything she thought Ripley might like. She discovered a diamond engagement ring in Randy Wrangler's PD locker and grabbed it for herself. Using it to propose to her bestfriend, William Gunner. She proposed the next time she ran into him, December 9th, 2021. And he agreed to be in a platonic relationship with her.

Wedding plans are in the works.

Chief of Police Sam Baas promoted many female officers during a PD meeting on December 10th, 2021. Pond and Vale obtain Corporal, and Hall and Martell attain Captain. Making Martell reconsider her decision to work as a sheriff's deputy in Toretti's office. Her goal was to relieve Bass of some of his responsibilities.

She has demonstrated how good she is with her new leadership role. Helping P&T with recruitment and taking charge of the meetings, amongst other things.

The Ladies of PD Meeting

The Start of the Harem

Martell was involved in a big court case in which Kaminski and Riggs were pitted against their roommate. She was questioned about her relationship with Riggs and the events of a private meeting between the two, during which she said that the two would maintain a "professional" relationship moving forward.

She left the courthouse with a mission due to the long court case. To design and build a harem of willing and consensual sex slaves and officially gain her harem.

Martell went to Bass at some time and told him about her intention to establish a harem with members of the pd. Which he approved of. 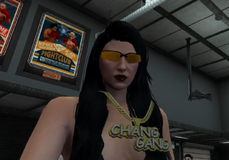 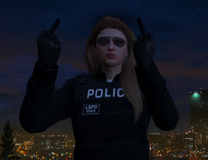 Tracy is too sexy for BCSO

Tracy in her former BCSO uniform.

Tracy in a rage

Wrangler, Fingle and Martell; The Holy Trinity by Tydus

Off Duty Martell
Art by fourthwright

Den and Martell; a betrayal
Art by conviria

Martell with Lambo and Stan
Art by OC