Tommy Tate is a character role-played by Zerkaa.

Tommy Tate, widely known as Tommy T, is a British road-man who fled to Los Santos to start fresh, after living a life of crime in South-East London, UK. Tommy has not spoken much about his life in England, simply saying that he had to leave as it was 'getting too hot for him'.

When he first came to Los Santos, he said that he wanted to leave the life of crime behind him and tried to stay clean. He managed to keep his record clean for 25 days. He had a close call with losing his clean record after only a few days in the city when he cut off Stanky Leg's ear, however he was able to escape the charge as there was no proof that he had committed the crime.

Tommy formed a gang along with Adam Ababwa, Dwayne Flores, Remy Brown, Moses Khan and Eli Porter, known as The Mandem. Together, The Mandem have committed numerous minor and major crimes since their formation. Tommy often serves as a voice of reason within the group due to him being the most level headed. The Mandem see each other as family and have said numerous times that they would do anything for each other. Despite originally saying that they would not have a leader, Tommy was officially appointed as the leader on August 19, 2021.

When The Mandem wanted to hit a bank, Tommy decided to learn how to hack. They purchased 15 practice laptops from The Game Masters and Tommy used all of them. He was able to hack four of them in a row, however they didn't purchase anymore practice laptops for quite a while. Several weeks later, Tommy purchased a new practice laptop for $15,000. He used it for the three days and managed to successfully hack the system nine times in a row. The day after the laptop expired, Tommy tried to get another one. He was contacted by The Game Masters, but he took too long to get to the location so when he arrived, he found a note saying 'GAME OVER'. The next day, Tommy tweeted Ready Player One again. After a few hours, he received a call saying that he had been given another chance. He received a ping and apologised for not arriving the previous day. They told him that he could still purchase laptops, but warned him never to be late again.

He is a very loyal person to those who have helped him. Due to Abdul giving him a tour of the city on his first day and giving him a job, he has said that he will never sell his taxi, even though he is no longer a taxi driver. He still occasionally drives the taxi, but now drives his Audi RS6 the most, the purchase of which more than doubled his total net worth.

Tommy has got a deep voice, which Dwayne said would work well on a drill song. Dwayne wrote a song for him and Tommy to perform called 'Tommy T', which was released as part of Dwayne's 'Golden Boy' EP. The song became incredibly popular, and is currently the most streamed song in Los Santos with over 5.7 million plays across all platforms. It is the only song that has gone Diamond in Los Santos. Despite having only made one song, Tommy is the second most streamed music artist in Los Santos.

The release of the song has made Tommy very famous within the city. Numerous people have approached him and told him that they are fans of him and asked him to sign things for them. He has performed his song live three times. Tommy is also very recognisable due to the lime green puffer jacket that he almost always wears.

Tommy usually uses talks with a deep 'road' voice, however he sometimes changes how he talks when talking to Americans. He uses lots of English slang, which sometimes confuses the Americans. Tommy's deep voice can help him to intimidate people if he wants to.

Tommy has got seven jobs, however he rarely works for most of them. He has never done anything for Ocean Express or Cluckin Bell, he has made one song for Wu Chang, and he has almost entirely stopped working as a taxi driver. He was hired at Diamond Sportsbook as a bookie, primarily for English sporting events. He gets paid 20% of all the profit made by bets that he puts onto the app. His job at Sportsbook is the job that he does the most work for as he frequently puts up bets on the app. He found out about PawnHub and asked Lexi to hire him. He asked to be a Co-Founder but she declined. He then asked if he could be a 'PawnStar', which Lexi agreed to. Tommy participated in 'Corpo Kid', which he ended as the joint winner and became CEO of the Diamond Casino Hotel along with Sabith 'Bunny' Cohen.

Tommy is the co-owner of four website domains. Along with Stacey, he purchased the eBuy, Gofundem, Sportsbook and Casino domains. They each paid for 50% of the websites, paying $23,500 each. After having a meeting with Ramee and Dean Watson about the Sportsbook website, Ramee gave him the $10,000 he spent on the website back.

Tommy has often said that he feels as though he is cursed. Because of this, the term 'The Tommy T Curse' is often thrown around between The Mandem. He believes he is cursed due to his unusually bad luck. He once span the wheel in the casino upwards of twenty times and only won on three of the spins. He frequently gets unlucky with jobs, such as when he wanted to hit Paleto and the Jewellery store but they had both been hit already. When he rolls a dice, he often gets a 1, which lead to Stacey nicknaming him 'Tiny T'. He has accidentally been punched and knocked down numerous times by people that weren't even aiming for him and he has been knocked off of bikes and sent through windshields by locals driving into him.

Tommy has had numerous business ideas. They include PawnHub, which he had with Adam. However they found out that Lexi already had ownership of the name so they abandoned the idea. He also had the idea of making a pizza company called 'Tomminoes' as well as having a tea company called 'Tommy Tea'. He and Claire also came up 'Cam On', a company that would sell polaroid cameras and photo albums. Claire made a pitch for the company that they are waiting to give to the mayor.

When Cerberus were preparing for the 'Corpo Kid' TV show, where they would hold a series of challenges with the winner becoming the CEO of Dean Watson's hotel, Ramee recommended Tommy as a contestant. He was then interviewed and made it through to the second day. On the second day his team won the first round, putting him through to the second round. During the second round, Tommy was tasked with putting together an event. At the end of the round, the contestants each had to vote for the three people that they thought least deserved to be in the final. Tommy, Dean, and Bunny received the least votes, and Cerberus decided to use their 'Golden Ticket' to bring Lexi back. In the final, Bunny won the first round, and Dean placed last. Dean was then told that he had to eliminate either Tommy or Lexi, and he chose to send Tommy into the final. After the final round, Cerberus told them that it was down to Tommy and Bunny to pick a winner. They were told to either pick 'Divide', where they would share the CEO role, or 'Conquer', where they would take it for themselves. They both chose 'Divide' and both became CEO's.

The 1st character Tommy created in Los Santos. He has a high pitched voice and ends most of his sentences with 'man'. He is often used for crimes and racing and made his first appearance was when The Mandem wanted to conceal their identities while teaching Tommy to rob people off their shoes during his 2nd day in the city.

Borrowing inspiration from the Captain Price of the Call of Duty series, he was created when Adam, Moses and Mando were planning on doing a jewelry store heist and planned on wearing matching army outfits. Captain Price is an old ex-military infantry that spent most of his time fighting the war, and speaks in a deep and gritty British accent. He is often used for heists or for pranks on his friends. Captain Price claims to have been in the army for thirty-five years.

Lispy has a raccoon head with his tongue sticking out and wears a white singlet with red shorts. He was created when Tommy and Adam were on the run after doing a drive-by on Mando to conceal their identity. Lispy has a high pitched voice with a distinguishable lisp. He is used occasionally to conceal Tommy's identity after a crime or for pranks.

Jeff is an imitation of a Vagos gang member, wearing a mask and a noticeable yellow shirt with a sharp American accent. He was created as a prank on Mando and Moses until it backfired when actual Vagos members arrived at the scene, to which Tommy said that it was Jeff that was there on that day and that he does not 'recognize' him. 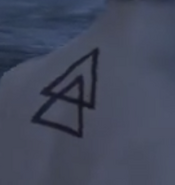 Tommy's Back Tattoo
Community content is available under CC-BY-SA unless otherwise noted.
Advertisement