80bsaget
Tim Lee is a character is role-played by 80bsaget.

Tim is Sun Moon's grandson and member of the Korean Mafia. He also has a brother named Jim Lee. He is ranked second in command in the organization. Tim is also a co-owner of the casino and regularly host blackjack games.

He joined the Korean Mafia alongside his grandfather Sun Moon, his number two in the family. He is also the closest person to Sun Moon, although Tim is a lot more reckless than Moon and is most experienced when it comes to shooting guns. The group has gone to war with the Chang Gang and Leanbois. Often outmatched, they defend their honor even if it means losing everything.

During a war between the Korean Mafia and the Leanbois, Tim kidnapped an unsuspecting Ellie Dono. At the time it was assumed that Ellie was a member of the gang. Although Ellie was good friends with Sun Moon and Tim, she was taken to a hillside and forced to record a message. Moon and Lee wanted to send a message to the Leanbois and shot Ellie on video.

Tim Lee shot both Al Saab and Brenda Pancake, dumping their bodies off the pier. The attack was retaliation on Saab for a previous hostage attempt. Brenda and Saab happened to stop at a location Tim frequently visited. He took both by gunpoint and shot them dumping their bodies into the ocean.

Brenda was rescued by Breezy who was in the area by coincidence and located her body. Saab sought revenge and took on his darker persona know as “Dark Saab.” TIm Lee was captured and hit by cars twice in a row. Saab then took Lee to a city crane and hacked his body with an ax. After months of rehabilitation, Tim survived his injuries and the war was ended.

Sun Moon chose to give away most of the Korean Mafia's stash to the Leanbois. He did this without consent from other members including his grandson Tim Lee. He was infuriated by this and felt that his grandfather had forgot his Korean roots. Tim assaulted his grandfather and threw him from a rooftop. Sun Moon would recover, but he is now at odds with his family.

Tim now works with his brother Jim renting properties to residents. He plans to rebuild the Korean Mafia. Leanbois members Lang Buddha, and Ellie Dono currently rent a property from the Lee brothers. The property is used as a stash house for weapons and drugs. 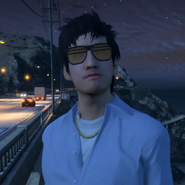 Tim and his gun

Tim and Jim speak to Leanbois
Community content is available under CC-BY-SA unless otherwise noted.
Advertisement