Thomas Metzger is a character role-played by Vaerinis.

Thomas Metzger is a Lieutenant for the Senora Desert Sheriff's Office, Badge #908.

He was previously a Sergeant for the Los Santos Police Department, Badge #408.

While sometimes seen as "by the book" when it comes to the job, Metzger is actually a sweetheart. He can be seen goofing off and poking fun at situations on a regular basis. Metzger cares deeply for the safety, mental, and physical well-being of his fellow officers.

While training Cadets, Metzger will go the "extra mile", and has been in charge of organizing the Police Academy for new recruits. Following Academy, if requested, Metzger will offer to go with the Cadets to the airfield grounds to allow them to practice driving, radio communication, and play out any traffic stop scenarios they may be struggling with. 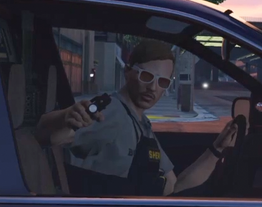