Thomas Dwayne is a character role-played by Dunrunnin12

Thomas Dwayne worked as a consultant for the Vice City Police Department before coming to Los Santos. He actively seeks to improve the community and is a devoted father.

Thomas serves as Deputy Mayor. He was confirmed on February 17, 2021 alongside Andi Jones. He formally tendered his letter of resignation to Andi on April 21.

Thomas Dwayne was the son of Damian and Laura Dwayne. Damien was a technology mogul while Laura was a shrewd business woman. Thomas attended university to become a surgeon. During his residency, Thomas met Martha Kane; a surgical nurse who aided him in his first surgery. The two shared a dream to heal the broken. Through their shared ambition, the two began to regularly chat. After his residency, Thomas began dating Martha.

They married and their first son would be born a few years into their marriage. Bruce favored Thomas with the raven black hair and light sharp blue eyes of Dwayne family. Six years after Bruce's birth, Thomas and Martha would happily welcome home another child; Thomas Dwayne, Jr. Two months after his birth, Damian Dwayne would pass away and leave a substantial inheritance. In time, the Dwayne family began to live a very relaxed and luxury filled life. While Thomas continued to work as a surgeon, Martha felt she could make a greater impact in philanthropy. They gained a local celebrity status.

Tragedy struck on Bruce’s thirteenth birthday. The Dwaynes had been escorted to the side exit of the theater into an alley so they could leave in peace. Instead, they were confronted by a robber who murdered the oldest child during the fray. The family was torn apart. Thomas turned to revenge and used information gathered from a befriended police officer to find the murderer. Upon Thomas’ return, he found that Martha had spirited Thomas Jr. away. There was nothing left of their relationship. He had later come to Los Santos in search of her, but it was never discovered why.

On the surface, Thomas became a therapist. In the criminal world, Thomas became known as the “Narrator.” He had an uncanny ability to draw information from others, but it was not enough. He explored hypnotherapy; used his patients to test out theories that he could create agents. Thomas joined the Prune Gang to seem less threatening, but continued to create more sleeper cells throughout the city.

Thomas eventually moved on from the Prune Gang and manipulated those around him to believe he was the leader of the Illuminati. This later became Imperium.

Thomas at the beginning of 3.0 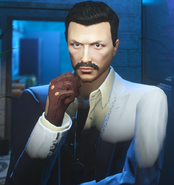 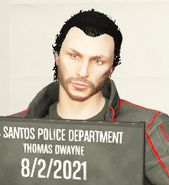