Thom Yung is a character role-played by Plashir.

Thom Yung is known for his reserved personality and serious but emotionless mannerism. And while he might demonstrated mindful and silent demeanor toward people he hangs around, his backstory provides a deeper insight into his emotional side. He's remained his introverted self throughout any situation even when he was complimented for his abilities or challenge with a conflict. However he will occasionally shows titter of a laugh when he's happy. While often times his personality has been regarded as bashful, Thom are not the ones that shy away from his loyalty with the HOA.

Thom is a newly promoted HOA member currently active in the group. He was one of the new participants in HOA academy on its 2nd iteration. He was recommended by Freddy Fastfingers his long time best friend as a hangaroud for the HOA. Soon eventually Thom takes up the courage to personally ask Siz to be a permanent member of the group starting with a HOB status. On June 10th 2022, Thom did a fleeca job where they dressed as another HOA members. Upon finishing the job and reunited in Grapeseed's clothing store, unbeknown to Thom, GRL had made him choose between the cut from the bank job or a mysterious black bag she holds on her hand. Thom conscientiously chooses the black bag and was surprised with a folded High Stock HOA kutte and his cut from the bank both inside the bag.

Despite keeping to himself, Thom Yung is one of the most capable member of the HOA, and his well grounded status is a testament to his prominent repertoire. Siz, Ant, Julio and GRL, who holds the positions of High Command in the HOA, even noted how Thom Yung's capability are something they always found considerably exceptional. When his name was first brought up to HOA as a potential recruit, every member that knows Thom immediately praises his talents and aptitude in gang activities as immaculate. While only been taking up hacking in late November 2021, Thom has been perfecting his skill ever since and now has been an important hacker in his peers. In one incident of saving his OGs in the hospital while still a prospect (HOB), Thom at a drop of a dime pulls out a gun to shoot at cops upon Siz's command. Even knowing the risk of terrorism, he is willing take the charge to show his usefulness towards the group. Well known for his situational awareness in conflicts, his driving adequacy is also deserved to take notice of.

Formerly a gang member of The Stable, he part ways in good terms after wanting a different path in his journey. He remains a good friend with the majority of the now defunct Stable members. Thom also nearly joined Seaside from an invite from Javi but decided to stick with Freddy who he's been best friends with for more than a year. A decision he made to keep in company with the HOA prior to any affiliation. 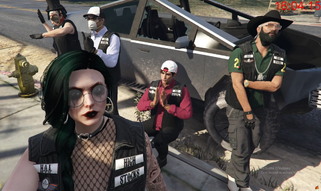