The Femly is a criminal syndicate that formed in Los Santos in July 2021. The group has grown into a collection of talented yet dysfunctional social misfits who coalesced into a gang of sorts following numerous bank robberies & car boosts they conducted together during the latter part of the summer.

Despite being well-known for the technical capabilities of its' members, from driving to shooting to hacking, The Femly are also known for their rambunctious and often "SBS" nature. As an example their early working name, "Oonga Boonga Crew", arose out of the monkey-like manner Goofy and May went about doing an oxy run early on in the gangs' formation (much to Jay's irritation). During the gangs' formation the Angels have proven to be a valuable and consistent ally providing not just a source of fun criminal tools, but also good friends to do crime with.

Although they are arguably one of the less violent and conflict-oriented gangs in the city, The Femly are no push-overs and respond to attacks aggressively and without remorse. However, despite being quick to draw a gun, the group is almost always willing to talk things out and come to a non-violent solution if possible. The group so far has kept themselves out of major gang conflicts in the city and shown more interest in continuing their bank-busting and car-boosting enterprises. With a large number of the group being either street racers or close friends with street racers, The Femly are also very active in the Underground scene as well.

The gangs formation has its roots in Jay's quest for a steady group of trustworthy people to do jobs with. Since arriving to Los Santos the man had made many connections - and found many flakes and backstabbers in turn. Jay's search for a crew to call his own would eventually begin to bear fruit once he met Mayumi Himura by happenstance on Twatter. After some talking, the two were robbing banks together like old pals. Jay & May's chemistry waffled between bitter divorced couple and siblings with a long rivalry, but it somehow worked.

After a short time working together, including their first vault job with Yuno Sykk & Raymond Romanov, Jay began to push for something more stable then just a group of friends doing crime together. Enlisting the help of May's girlfriend, Karina Dawn and Jay's friends Ai "Betch" Musori & Oki Doki, the nascent crew began the plans of their weed empire. While Jay showed the ladies his illegal grow spots, with help from Karina's Sand King, he also talked about plans for their own legal weed dispensary. Jay worked hard on a business plan, with the crew pitching in product ideas and name suggestions, and was soon bringing the yet-nameless group in front of Mayor Denzel Williams in the hopes of getting a legal front for their illegal plans. Unfortunately the federal government decided there were enough legal dispensaries in Los Santos (odd, considering how hard it was for the gang to buy weed in the city) and their plans were for naught. Following the disappointment of the failed business operation, Betch ended up drifting away and joining The Guild with Oki leaving for other reasons. Karina, a busy woman with her manager job at Harmony Repairs Garage and obligations outside the city, did what she could to help the crew when she was around but ultimately couldn't be present as much as she would've liked to be.

During this time, Gloryon, hearing that they were searching for crew-mates, contacted Jay one day saying he had someone to introduce to him. They met up and Gloryon introduced Jay to Goofy, an illegal street racer who was already making a name for himself. Jay was interested in Goofy's driving skills and wanted to see them for himself, so Jay asked Goofy to take him to a race. Jay had been awake for an extended period of time so he fell asleep during the race and woke up after the race had concluded stating that "[Goofy's] driving was so smooth that I fell asleep in the car." To further test his skills Jay and Gloryon invited Goofy to do a bank truck with a 4 door Buffalo, a vehicle which was known for being slow and bulky. They escaped successfully and Jay invited him to do more jobs alongside May. May, already familiar with Goofy having met him during her re-introduction to the local street scene, was excited to have him a part of their crew. Their personalities clicked quick and May & Goofy were quick to exhaust Jay with their hijinks. May & Goof usually ended up sharing a single brain cell while working together, leading to the early working name of the group, "Oonga Boonga Crew."

From there Jay, May, Goofy, and Karina ended up forming the nucleus of what would eventually become "The Femly."

Nightfall was a racing crew formerly comprised of all the members of The Phantom Thieves/The Femly and close associates. The formation of the race crew came after chaotic changes in the Underground and the assassination of Marcus Mathers (Big M) ordered by the Puppet Master. The crew focuses strongly on the elements of a positive race scene and diplomatic/nonviolent communications with other racers and the PD. Meetups, car cruises, and other events by Nightfall harken back to the old school NoPixel race community and ethos. The crew is known for their superior racecraft, playful antics, lewdness at times, and their shared attraction to being rather Pepega.

Unfortunately, due to the unexpectedly violent & chaotic nature of the racing scene following it's restructuring, May withdrew from the scene. The stressful nature of the new scene ruined the spirit for her, and the overwhelming police responses she seemed to get made the risk far too great. Goofy & AP attempted to lead Nightfall without her but after the struggles with more powerful groups & the unshakeable image that "all the good racers joined Nightfall to dominate", they found little reason to keep Nightfall going. Goofy & AP departed for Tony Corleone's crew, Redline, while the rest of the members of Nightfall found their own way. Nightfall is currently defunct. 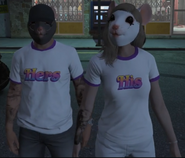 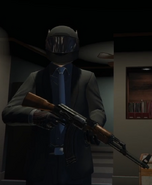 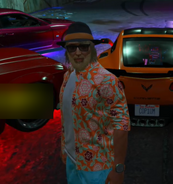 Goofy, Rat, Nex, and JJ taking a group picture together while planning for Bobcat. The boys are all dressed up in honor of Chap who recently took a long vacation out of the city.
Community content is available under CC-BY-SA unless otherwise noted.
Advertisement