The goal of The Gnomes is to challenge the power imbalance that the government has over the people of Los Santos; namely the Department of Justice and the various divisions of the police force.

The Gnomes was founded by Maximilian "Yung Dab" Thoroughbred and Eugene Zuckerberg.

The members of this group are not limited to criminals, as several doctors, civilians, and lawyers also consider themselves as a Gnome.

Following multiple incarcerations in the city based on clothing Eugene thought up the idea of using a symbol of sorts to do crime. Eugene presented the idea to Yung Dab who liked it. Eugene who had been doing the Gnome voice and who found the mask shortly before the idea proposed the gnome to be that symbol. The reasoning for the identical gnome mask is to practice the idea that anyone can be a gnome. As the mask is sold at every clothing store in Los Santos, it is an anonymous legal public identifier; able to be owned and worn by any citizen. There is no other deeper meaning or symbolism for the use of the mythical creature, or gnome mask specifically.

Eugene and Yung Dab proceeded to wear that mask for every job in the following months. Though Eugene was mostly focused on spreading the terror trough bank jobs, Yung Dab tried to focus on public terrorism.

After Yung Dab's incarceration The Gnomes became more and more rare over time. Though it was never seen as defeat because the changes The Gnomes were pushing for were enacted due to The Gnome pressure shortly after.

These days The Gnomes usually appear due to Eugene's influence in various forms to terrorize the new generation of civilians and cops. While reminding the veterans that they should never forget to fear The Gnomes. 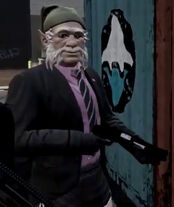 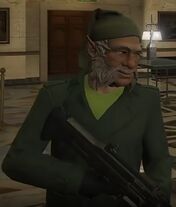 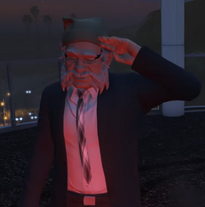 Kevin Shaw's Gnome outfit
Add a photo to this gallery
Retrieved from "https://nopixel.fandom.com/wiki/The_Gnomes?oldid=56294"
Community content is available under CC-BY-SA unless otherwise noted.