Was engaged to TJ Mack

Thalia Hayes was a character role-played by LisaMunchy.

Thalia was a psychologist at Pillbox Medical and Parsons Rehabilitation Center. She tried to help the citizens of Los Santos cope with their problems, and work through their issues.

On June 2nd, 2020 - Thalia fell from Pillbox Hospital and had a head trauma that caused her to lose her memories. All she remembered was she was under Serge trying to be a psychologist. TJ Mack was trying to help her regain her memories.

A couple of days later, Thalia was able to get her memories returned.

On July 18, 2020, Thalia Hayes was stabbed and promptly rushed to Pillbox Medical and eventually passed away as announced by Doctor Daniel Rogers. 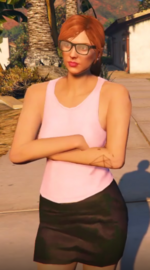