Terrance "TJ" Walker is a character role-played by DocWizard.

Terrance "TJ" Walker is an Officer for the Los Santos Police Department, Badge #499.

TJ works diligently to punish those who break the law but can be seen as one of the more relaxed cops on the force. He has a clear soft spot for his family and because of that tends to be more lenient towards them. His father, step-father, and general family often are on the opposite side of the law: That means that at times his relationship with those closest to him is threatened by his job and duty as a police officer.

He is known to be upbeat and always up for a laugh. Currently, this side of him is more hidden since he's suffering the aftermath of getting shot in the head by people he believed to be family.

Walker has a complicated past: He grew up in Los Santos, used to do petty crimes like stealing cars and he has a history of drug abuse. His friends got caught one day and Walker decided that this life wasn't worth it anymore. Thus he used his clean record to become part of law enforcement[1].

Due to him being the son of Barry Benson and step-son of Irwin Dundee, he is the only police officer that the BBMC allow into their Billabong. He often visits this area, in Vespucci beach, to check-up on and talk to his fathers. Although he is allowed into the Billabong, TJ finds himself frequently having to disclaim to other members of BBMC that he is a person and not just an officer of the law—due to BBMC's distrust with the PD.

Fall Out With BBMC

The club has always distrusted the police but TJ, due to being Barry's step-son, was tolerated on their turf and they even formed bonds. This changed, as after a shootout with the police department BBMC decided to hunt for cops. They found TJ, kidnapped him and Dundee gave the order to shoot him. Jean Paul took the shot, the members of BBMC (Chain, Junior, Collin and Pez) watched. TJ was shot four times in the head[2], he was dead for three minutes and got brought back to life in the hospital[3]. He had to stay in the ICU for multiple days.

This cut deep, especially since Barry had given an order in the past not to harm TJ if it isn't necessary for a job. Additionally the club didn't tell Barry directly after it happened, Barry had to learn the truth from Chatterbox and Emma Gaine[4].

The break of trust, the trauma and medical complications are taking a toll on TJ. He distrusts deeply his own father, since it is Barry's club that executed him point-blank[5].

He had to do physical therapy[6], toyed with the thought of taking drugs[7] and is currently thinking about leaving the police department[8]. The facts that he gets shot (by BBMC or because it's Hellweek) just because he is a police officer and that he doesn't get recognized as an actual person are the main motivations of his present wish to leave the PD.

TJ and his dad, Barry Benson

TJ with his grandad, Sam Baas

TJ and his brother, John Spartan

Serious Talk between father and son 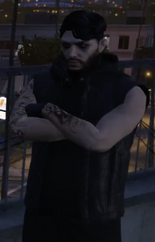 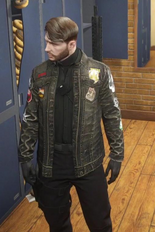 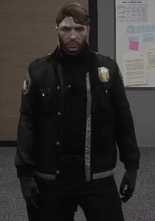 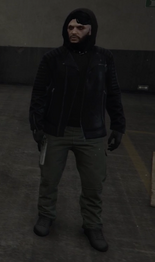 Outfit after he got shot by BBMC 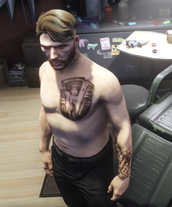 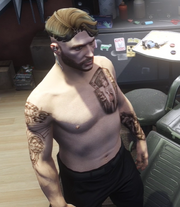 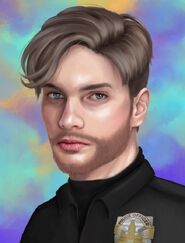 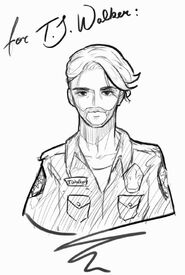 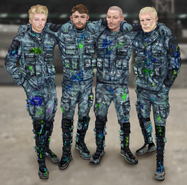 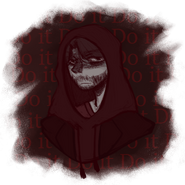 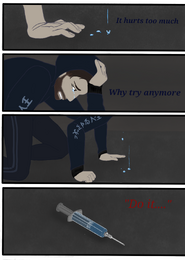 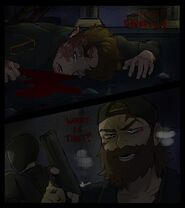 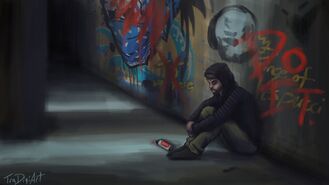 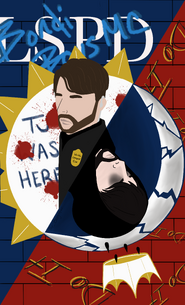 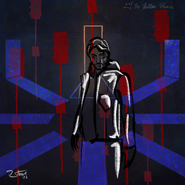 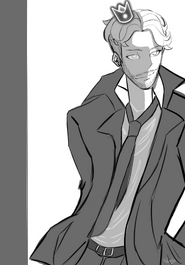 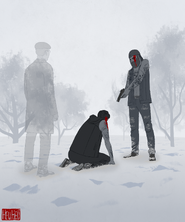