Tappy Nippers is a cat role-played by sodapoppin.

Asshole cat, that eats basically everything in its sight. Including fingers.

Tappy is thought to originate from Rust Island, sources say it was part of a group of kittens that built a colosseum and could shoot sniper rifles. This is however unconfirmed. 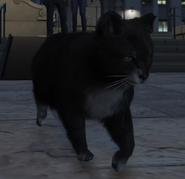 Retrieved from "https://nopixel.fandom.com/wiki/Tappy_Nippers?oldid=97775"
Community content is available under CC-BY-SA unless otherwise noted.