Sydney Frost is a character role-played by steamcharlie.

She grew up on the west coast of Canada. In her early twenties, Sydney went travelling through Europe, during which fell in love with an American woman, Teresa Steeler, and moved to New York to be with her. They were happy together in the early stages, but as things progressed, Sydney slowly began to realize the manipulative and abusive nature of their relationship. After a few years together, Sydney left Teresa, changed her last name, and (at her brother's suggestion) move to Los Santos, SA, knowing that Teresa was unlikely to look for her there.

Her brother, Parker Woods, is the only member of her immediate family that knows that Sydney has changed her name and moved to the city. Her parents are still in email and phone contact with Sydney, but have knowingly been left out from knowing where she moved to in case Teresa approached them.

Sydney suffers from severe depression and, until recently, had not coped with it in healthy ways. 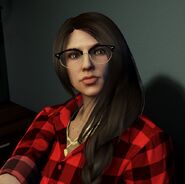 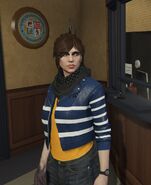 Sydney with her Yosemite Rancher

"Talking" to Chris McGrawl at the top of the dam