Sybil Shepard/2.0 and Prior

< Sybil Shepard
View source
watch 02:52
Roblox: DeepWoken - The Loop
Do you like this video?
Play Sound

Sybil Shepard is a character role-played by OurLadyOfRaptors.

Sybil Shepard is a part-time news reporter, yoga instructor, and loiterer. She is also an absolute potato driver, know to fly out the front window more times than not. She is very easy to talk into things, which can get her involved in things she normally wouldn't.

Sybil Shepard moved to Los Santos at the urging of her best friend Tom Candy. They hung out all the time, helping each other chop cars, hit pawn and try to make Sybil money and get Tom out of debt from jail. Tom, known for his crippling sugar addiction, was forced to leave town and go to rehabilitation to try and help his diabetes. When he came back, he had completely changed. A chip had been inserted in the back of his neck so he couldn't eat sugar at all and it made him tired and zombie like.

After a few days of having the chip in, Tom took his own life at the Pink Cage. Hubert was the last one to see him and he attempted to save Tom but it was too late. Sybil blames herself for not being there to help him and for not taking his mood change more seriously. One of her most prized items is his ID, given to her by him before he left for rehab.

After she lost Tom, she ended up dating Jesse Morales of the Aztecas. Over time she became affiliated with Aztecas, attending their meetings, having keys to houses, and providing them with materials. Todd Dee became like a brother to her and she has a stash house for him in her name. The more time she spent in Southside, the more she acted like a Southside gangster. It all came to a head when she put on Aztecas colors and joined the war against Vagos.

There was a battle in which she and the people with her were downed and she mouthed off to Flippy. He grabbed her and took her to the pig pens where they burned her and left her for Jesse to find. It took so long for them to grab her that she ended up in the ICU for a while and has no memory of what happened that day. She realized that living in Southside and being involved in that life wasn't the life for her.

She later broke up with Jesse via text because he wouldn't come back in to the city at the time and she was interested in Summer Mersion (and sleeping over at her place, with heavily implied sexy results).

Sybil and Summer started dating. Summer hired Sybil at QuickFix Fix as one of the worst mechanics. She has no idea what kind of car the customer has ever but somehow has kept her job. She also worked for Mickey Rivers at Weazel News and quickly got promoted to a full time Reporter. When Mickey was sent to the ICU for months, she worked alongside Acting CEO Gregory Stonefinger and Raymond Porter to keep Weazel News running. With the return of Mickey to his CEO position, he promoted her to Chief of Staff. She is now the hiring/firing/promotion person as well as HR for Weazel News.

Sybil started her own yoga business called Galaxy Yoga. She offered yoga lessons and free weed to anyone who wishes to relax. Galaxy Yoga currently operated out of a house in Vinewood owned by Pixie Plum. Pixie uses this house as a therapy center, with yoga being one of the potential alternative medicines offered there. She's recently hired her first employee Emma Gaine.

With the death of Sybil's best friend Justine Maway, Sybil inherited her information network. Sybil and Kyle Rogain attempt to keep an eye on the most dangerous criminals of Los Santos, particularly stabbers and stalkers. This information is shared as needed with the inner circle of Weazel News and formerly with Quick Fix and Summer herself. Lately Sybil has been trying to expand this network and is trying to bring in Bryant Robbins, a reporter for Weazel News, and train him accordingly. She has found a friend in Nathaniel Greyson and often shares information with him as they seem to keep ending up on the same serial killer's lists of victims to be.

When Jazz Ryder became CEO for Quick Fix, Sybil got promoted to Senior Mechanic. So far she hasn't fucked up. 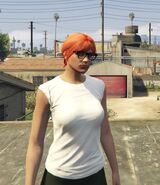 Sybil when she ran with Azteca

Sybil and Tom
Community content is available under CC-BY-SA unless otherwise noted.
Advertisement