Swan DeLeur is a serial pickup artist who values possessions over relationships. She currently holds a permanent position at Rooster's Rest.

Between Swan's personality and Roland's Religion, it's hard to say how close the two actually are. Their interesting dynamic aside, Swan and Roland are on very good terms. When they first met they rode around discussing Roland's love of fate that involves the dice then he suggested she start trying it out. Surprisingly Swan took him up on the offer, she would roll the die to determine some things but not on every decision like Roland would.

Swan met Cleo on a chance encounter after a shift at Rooster's Rest. Cleo offered to give Swan a lift to the Vault, and afterwards Cleo opened up to Swan about her recent troubles which Swan gave sound advice, but unbeknownst to Swan, her flirtatious demeanor was too much for Cleo to handle. 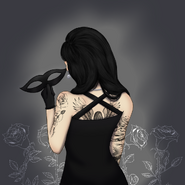