Stag is a member of The Guild. While his legal name is Stanly, most people only know him by the name of his D&D character, Gea Stagdancer. Stag is a Paladin. His alignment used to be lawful good, though it has likely shifted over time. He usually wears a metal helmet shaped like a rhino head or robot rooster.

Not much is known about Stag's past as he never mentions it to his Guild members. He grew up in some sort of camp where he was frequently punished and tortured. Due to his traumatic past with his biological family, he feels more connected to The Guild and the Rooster and regards them as his real family.

His signature quirk is the slurping sound he involuntarily makes, not unlike a Minecraft spider, though it only occurs while wearing his helmet. When he was younger his jaw was shattered but never healed properly, resulting in parts of it being free-floating. Wearing his helmet rearranges his jaw and causes him to speak with a bilateral lisp.

Stag may experience some form of multiplicity or an undiagnosed dissociative disorder. He sometimes switches into one of his alter egos such as Casey, an Australian criminal, or an accountant. Whenever an alter ego makes an appearance, he takes off his helmet and ceases to slurp.

In April of 2021, a time when only car racing was popular in Los Santos, Stag started a new bike racing scene. After racing only with his friends from The Guild at first, eventually, more and more people started showing interest. The racing scene began dying down again after a few weeks due to bike repairs being too expensive which made racing financially unsustainable. Today, the bike racing scene has been revived, but none of the original racers from The Guild are a part of it anymore.

While working at Rooster's Rest, Stag would come up with a number of strangely specific questions every few weeks and pose them to his friends and patrons of the restaurant. Most were highly personal and sex-related.

Afterlife Autos is a business located at the docks near the Tuner Shop and run by Stag. Stag steals local cars, tunes them by installing additional parts such as nitrous oxide engines, and sells them. Due to having so many extra car parts, Stag is frequently seen playing with all kinds of vehicles, such as wheelchairs or forklifts with NOS.

Stag has claimed the docks and tunnels as his territories and dubbed them "Stocks" and "Stunnels" respectively. He spends most of his time guarding these territories. Anyone who enters is required to pay a toll. Only other Guild members are allowed to stay temporarily without paying a toll. 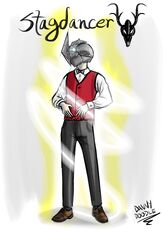 Stagdancer in his work uniform as drawn by Danny Doodle

Stag at the beach