Stanley Elizabeth Wheeler is a character roleplayed by Markiplier.

Most known by his nickname "Stan the water man" claims he is a 45 year old virgin ( April 25, 1975 ) to some while at other times lamenting his lost family, appears somewhat socially awkward and has a personal mission to hydrate the public. In order to achieve this mission, he is attempting to run a private business of delivering bottled water.

Along his journey to fulfill and finance his mission, he completes various odd jobs.

According to the voices in his head during his self monologues, his background consists of conflicting information making his actual history difficult to determine.

Sometimes talking to himself in his head, he recalls being in a coma, a past marriage, going to therapy for anger management issues and committing murder. He also recalls wanting to win back his wife Denise and his sweet baby boy Roy, having lost them somehow.

He got in a coma in the past when riding along with the "lovely lady" Kiki Chanel.

When starting his journey in Los Santos on Mar 19, 2019, and trying to establish his delivery enterprise he met a guy named Jimmy Bending who introduced him to the city and offered him a ride. He thought he was a friendly fellow and gave him the nickname "Friendly" Jimmy.

While riding around together he formed a bond with Jimmy, looking up to him and wished himself to be cool like him.

Fall to crime with JimmyEdit

After delivering crates of water and having bad luck and various problems, he met Jimmy again who offered him a job to tag along on, as long as he didn't tell anybody about it. He agreed right away.[1]

Jimmy showed him the ropes of his nighttime activity of acquiring lockpicks, and they performed a burglary on a home with one sleeping local inside. The unsuspecting Stan followed along and tried to justify his actions in his head "for friendship." Until he realized that his friendly Jim is a criminal, he fumbled and woke up the sleeping man and started to panic. Contrary to himself, panicking Jimmy is quick to action, revealed a big knife, and stabbed the man without flinching.

After making their escape, Stan asks Jimmy if the man will survive, but Jimmy responded, "Probably not, I stabbed him pretty good." To which Stan started weeping and eventually pissed himself in his car. They made banter about adult diapers and prostate issues until Stan came to terms with the murder and decided that he would like to tag along burgling more houses.

His past caught up with him with his former dating prospect that caused his coma - namely Kiki Chanel. She gave him a phone call and called him out for having stood her up on a promised date. Jimmy brought up the uncertainty of Kiki's sex and hesitated to accept but eventually gave in to the idea as long as Jimmy would be there and offer his support.

After being randomly robbed and used as a hostage by a bird, a clown, and a bear Kiki showed concern over Stan's well being over the phone. She tried to tell him what it means to be an accomplice and to sway him from spending more time with Jimmy. When they met Kiki questioned Jimmy who started arguing, as she felt offended by Jimmy assuming her gender pronouns.

Arguing about medical bills and Stan's spasm punching his emotions of his ex-wife well up within him. He and Jimmy argued, and he angrily called him an "ex-friend," he walked away right into a bar fight involving Kiki. Jimmy ran in and joined the brawl protecting his friend. The cops arrived, and while riding to the hospital, he cried his heart out, filled with regret about letting his best friend down.

Patiently seated in the hospital waiting room, Jimmy was there to greet him. After apologizing, they hugged it out, and Stan promised that he would tell his son Roy about "The nicest crack-dealer in all of Los Santos - Friendly Jimmy."

The "utilitarian fanny pack" in all its glory.

Having one of his many internal monologues.

"Bro:ing it up" with Jimmy Bending

Robbed by Bird, Clown and Bear 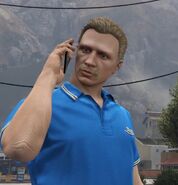 Stan on the Phone with Kiki Chanel 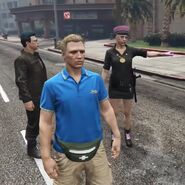 Jimmy Bending, Stan and Kiki Chanel
Add a photo to this gallery

Retrieved from "https://nopixel.fandom.com/wiki/Stan_Wheeler?oldid=42420"
Community content is available under CC-BY-SA unless otherwise noted.