The South Side Ballas were a south side street gang. They originally had the cul-de-sac of Grove St as their territory, but near the end of the gang's history, they had little to no territory since they lost their cul-de-sac territory to the rivaling East Side Ballas. Soon after the death of Kym “Lil K” Johnson, the last leader of the gang, the gang was disbanded and dissolved.

The South Side Ballas, better known as simply the Ballas, were known for wearing the color purple. Members often drove purple vehicles as well.

The Ballas proceeded to ask the Leanbois for rent money, which they refused. This provoked the Ballas into an ongoing war with the Leanbois over turf.

This war went on for months. Things reached more of a compromise after Big E became the leader of the Ballas.

Curtis was the first leader of the Ballas. Often autocratic in his leadership approach, Curtis was a passionate leader driven by anger at rival gang the Leanbois. He was irate over the Leanbois purchase of property on Grove Street and renaming the territory "Lean Street."

He recruited Arious Campbell, Emmanuel Biggs and Damian Frost to the Ballas.

Curtis then left town for a long period of time. Upon his unexpected return, Curtis was increasingly frustrated and felt the war with Leanbois was everlasting with no resolution.

As his frustrations grew he became more reckless which ultimately lead to his demise. During a botched bank robbery, he was killed by police.

Damian Frost, who had a very close relationship to Curtis Davis III, took over as the leader of the Ballas following Curtis' death. He was the natural next leader figure since he was effectively the second-in-command under Curtis' leadership and a close friend of his. However, Frost only lasted as the leader of the gang for one day, as he died one day after Curtis.

Frost was extremely angry following Curtis' death. He was shot to death by police officers after holding Brittany Angel hostage, in an attempt to get revenge on the police for Curtis, who was shot and killed the previous day by the police.

After the death of Frost, Big E took command of the Ballas. Big E was trained by Curtis, Breezy and Frost,heobserved their different leadership styles.

Soon after Big E arrived in the city he became very close friends with Boris Ivanov, the founder and leader of The Russian Mafia.

On March 15th, 2020, Boris and Big E were having a fallout over the partnership their respective gangs had established (The Russian Mafia and East Side Ballas) to wage war against the Vagos. It resulted in a gunfight between the two, resulting in the death of Big E at the hands of Boris.

K was unceremoniously made the new leader of the Ballas after the untimely passing of Big E. He had fully intended to pass the torch onto her if and when he died as there were notes discovered of his intent left on his corpse.

She led the gang for a while before being shot and killed by the rivaling East Side Ballas. Specifically, the individual who killed her was Jack Cortair - he shot her to death in front of Pillbox Medical Center.

Split in the Ballas

Right around the time of Big E's death and K becoming the new leader of the Ballas, Tyrone Biggums, an old Prospect/Member of The Original South Side Ballas, returned to the city after being inactive for almost a year, came back and believed that himself should have been the true leader of the Ballas and wanted to be the new leader instead Kym Johnson who was passed down the Mantle by predecessor Big E who which was given to him by The Original Balla Curtis Davis III. However, Kym refused this after Tyrone then accused her of being behind the deaths of Curtis which was false due to him being perma'd by AJ Hunter, Frost and Big E who was killed by The Russians leader Boris Ivanov a few days after the day Tyrone came back, Big E was killed by Boris Ivanov in a dispute at Mirror Park Cul-De Sac. K then shot down Biggums in the cul-de-sac, for creating lies in his attempt to take over.

Because of this, a civil war started within the Ballas between the members who follow K, the Ballas on Grove Street, and the new members who follow Biggums, the Ballas now located on Fudge Lane. Chang Gang was backing up Tyrone during this war, fighting and helping him out with guns and supplies. After several days of fighting and losing the majority of the fights to the South Side Ballas, Chang Gang felt ESB were still strong enough to put up a fight but with numerous offers of the South Side Ballas offering to put up the Cul-De-Sac in a term war with Tyrone and his Fudge Lane Ballas Tyrone unfortunately declined the offer and did not want the smoke...using the fact he didn't believe in the Southside's Term Wars. As a result, Kym maintained her position as leader like Big E wanted and the South Side Ballas continued to rule the Cul-De-Sac moving forward, One of the members did decide to switched sides, who was newer member Novah Walker due to her believing that it was the best option for her... whilst also the hope that both groups would be better of forming an Alliance. This is also when the Ballas following Tyrone Biggum's officially got their own territory on Fudge Lane due to not being able to take the South Side Ballas territory with aggression and being put down by the South Side Ballas. So there was then the beginning of two separate sets of Ballas with separate leaders (the East/South Side Ballas and The Fudge Lane Balla's).

Conflict between the SSB and the Leanbois was triggered by an altercation's between its members Tyrone Thompson, Cardell Jones, Aaron Johnson and Kym Johnson and LB's members Lang Buddha, Tony Corleone, Eugene Zuckerberg, Denzel Williams, and Ellie Dono which caused a perfect buildup of conflict stirring between both gangs.

This caused the South Side Ballas to offer the chance for Leanbois to put there money where there mouth is and compete in a full guns blazing war challenge for the entirety of the Cul-De-Sac and the remainder of the street known as Lean Street.

Terms for the war were set which included a mix of healthy and competitive roleplay and the two groups agreed to a Foot Fights Only to avoid the common car on car fights we see. The agreement of first gang to claim 25 of their rival's bandanas would take the 'sac'.

After many great fights and the war leading towards a 21-11 to the Leanbois. The Ballas were looking at a win after winning the next three fights brining the balance back to a 21-20. Tensions were high and both sides were beginning to be unsure of who would win the ultimate prize of the entire turf.

With a Final Bout in place and local southside residents peering from windows and doors, watching from rooftops and hiding from stray bullets to catch just a glimpse of the ultimate showdown The Leanbois finally took the win by catching The South Side Ballas Second in command Cardell Jones in a bush behind buddhas house after he stumbled over his shoelace and made a noise which was heard by the Leanbois Leader Lang Buddha and came to the unfortunate death of CJ by Denzel Williams in a final shoot out. Shortly after Lil' K was also shot caught slipping when she was taken down on a rooftop by Bullets from the Leanbois AK-47's and was then thrown from a rooftop by Denzel in the fight, leaving her in critical condition at Pillbox Medical where she was admitted to ICU.

The Ballas second in commands Tyrone Thompson and Aaron Johnson stayed true to there southside agreement and agreed transfer of ownership to the Leanbois.

The Leanbois sold the cul-de-sac to Chang Gang. Which In turn led to the cul-de-sac was being sold to Tyrone Biggums and his East Side Ballas who resided in the area of Inactive gang Marabunta Grande. For the time being, this effectively was the end of the South Side Balla's and resulted in being the group taking one of the biggest L's that the Southside had seen since OTT and his Misfits gave up their position on Misfit Row.

The South Side Ballas lost their central territory that they held and had built for the past three years.

This then led to the beginning of their disbanding.

The End of the South Side Ballas

After the death of Kym “Lil K” Johnson, the gang slowly declined in activity within the following weeks. Soon after, the gang was disbanded and dissolved. It no longer exists. All the former territories of the gang was then finally taken over by the East Side Ballas after numerous failed attempts to retake the Cul De Sac.

In the wake of the 3.0 phone update the South Side Ballas and East Side Ballas name and legacy was taken up by a new group, who simply rebranded to "Ballas". They held the same territory that the South Side Ballas had held before their split with the ESB. However, at launch their group roster was made up of entirely new individuals, with Outto-Tune Tyrone being the only member to have had any previous association with the Ballas in 2.0 (as a member of the ESB). 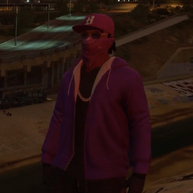 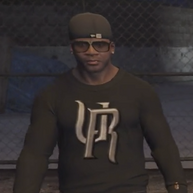 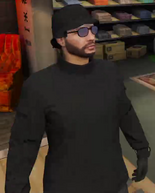 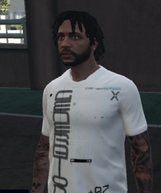 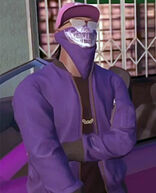