King of the Dirt

Chief of the HOA

Shadow of the Demon

(Shadow) King of the Skittles

He Who Dealt It (Smelt It)

Donk Lean
Siz Fulker is a character role-played by UberHaxorNova.

Siz Fulker is a crime-lord, domestic terrorist, weapons dealer, narcotics trafficker, racketeer, and security officer who is associated with multiple gangs and organizations in Los Santos. He is the founder and leader of the 🍊 Tang Gang 🍊 and the HOA (Homeowners Association/Hogs of Anarchy.) He is also the owner of the Mirror Park Tavern.

Siz is a very irrational, impulsive, and yet passive man. However, when first settling into the city he was consistently ridiculed for his prominent facial scar, causing him to also become: timid, helpless, dependent, and insecure.

Until, after meeting a wide range of people such as Mother and Yung Dab as well as experiencing multiple scenarios throughout his time in the city, Siz has gradually grown to become an assertive, comfortable, and independent person in his own right.

On the surface, Siz is shown to be rather dim-witted when interacting with other people. However, he is a relatively fast learner and can soak in a lot of information that people give him, often using this to his advantage later.

Because of this, Siz is usually quite apathetic to strangers and often only helps someone to get something in return. Although, Siz cares deeply for his close friends and is quite willing to do what he can to help them (even if it doesn't directly benefit him in any way.)

Siz has a history of being very chaotic as he often makes decisions on a whim, not showing concern about his criminal record. Siz actively seeks out trouble with cops should a favorable opportunity arise and has no interest in reforming to become a "better citizen".

Siz also tends to exaggerate experiences such as saying, "I was beaten within an inch of my life" as well as giving very child-like or generally poor explanations of experiences (sometimes intentionally just to see how people react.) Despite being somewhat reserved, Siz does a very good job of disguising himself when he goes into hiding, often taking up a brand new persona.

Early during his time in the city, he had a weak-willed, easy-going, and impressionable demeanor (due to the constant amount of abuse for his face during his first weeks in the city) which caused Siz to be easily influenced (often following the requests of anyone who asked.) However, this blind obedience had the unexpected result of him becoming close with many different influential organizations and individuals in Los Santos such as Mother and Yung Dab. Siz's personality had also evolved from his interactions with these entities, with him picking up their (mostly bad) traits and characteristics. Because of Siz's experiences he has a strong sense of self and can now even be seen leading others in his own endeavors (eg. The HOA or Fleeca Bank heists.)

After Dab's lockup and Mother's disappearance, Siz found himself leading what remained of The Family in addition to founding and growing his own group, the HOA. This, in turn, led him to be more responsible for the sake of protecting his peers and maintaining his connections. And so, while this newfound responsibility hasn't deterred Siz from partaking in criminal activity, it has forced him to act less brashly when it comes to crime (as he now has a meaningful motivation to escape, whereas before getting caught was more or less of a minor personal inconvenience.)

Of all the people he has met, Yung Dab has imprinted on Siz the most. Siz actively tries to carry on his legacy as a terrorist and criminal, with the majority of Siz's decisions and motivations stemming from Dab's influence on Siz.

Siz has a large scar covering the right side of his face and used to be very uncomfortable when others looked at it since it tended to be a point of ridicule/shocking. However, after months of exposure most of the residents of Los Santos no longer actively ridicule Siz's face (and when Siz does encounter a harsh newcomer, he now easily brushes off their comments as he's both: repeatedly heard practically every possible insult pertaining to his face and largely grown in self-confidence due to his supportive friends and own grand accomplishments). The scar was originally a birthmark that was healed through a rejuvenation suit, however, it reappeared after an incident where Siz jumped off of a parking structure and the right side of his head impacted the pavement. Siz's treatment regarding his face caused him to be initially timid and unstable, an example of this instability was Siz's prominent use of random chance to resolve heavy decisions. Early on this used to be done through a coin flip, however, Siz switched to using a D2 die.

After being kidnapped by some goons that threw him out of The Vanilla Unicorn in Canada, Siz lost a toe and suffered third-degree burns across his entire body, having to then undergo recovery in a rejuvenation suit which also restored his face back to normal condition. However, after a fight between Steven "Stevie" Mathis and Windsong, he jumped off the top of the parking structure they were all on to keep from having to make a hard choice, thus regaining his scar.

Ever since that incident, his "evil" half has begun to overtake his "good" half. He now rarely debates himself on what actions he should take, making far less use of his iconic die roll, causing him to become involved in many more criminal acts than before.

Historically, he was mainly affiliated with: Evita "Mother" Nimm as one of her "children", one of Mother's other "children" Steven "Stevie" Mathis, and his ex-girlfriend Georgina "Windsong" Williams. However, nowadays Siz is much more independent and connected as he is associated with: Arush Patel "Speedy" Santana as second in command of the Vagos gang, Al Saab as his close friend and ally of the Leanbois, architect of Dark Web Jacob L. Harth as one of his longtime/trusted associates, the currently incarcerated terrorist and rapper Maximilian "Yung Dab" Thoroughbred (whom Siz refers to as "Step Dab") as a Gnome and his surrogate step-son, and is covertly associated with the serial killer Bovice Wilkinson as his trusted assistant and harborer. Other associates of Siz are Griselda "Zelda" Harth, Buck and Gomer Colton, his surrogate step-sisters (Mother's "children") Victoria "Vivi" Veine and Erin Cox, Matt Joe, Denzel Williams, Nino Chavez, Tony Corleone, Allen Widemann and his lawyer and "best friend" Kevin Shaw. With Yung Dab, Buck Colton, Al Saab, Denzel, Tony Corleone, Speedy, Matt Joe, Jacob L. Harth, and his girlfriend, Griselda Harth, being among those he counts as close friends.

Not much is currently known about his background other than he was raised in a homeless shelter, has a sister named Martha, has a twin brother named Kermy, has two foster brothers named Diz and Fiz, has another supposed sister in Liz (however he doubts her relation to him), and never knew his parents or even his true age, although he seems to be aware that he knows that his birth dad is in prison and that his birth mother is in an institution, he also called his mother a “stingy bitch,” to Fiz. He spent three years in Liberty City at some point in his past and used to live in a box under an underpass for a while after moving to the city.

Once arriving at Los Santos International Airport, Siz asked Bogg Dann‘s taxi service to drive him "home." Without a home, Bogg knew just where to take him, and Siz willingly got into Bogg's trunk upon request. Later, while stopped at a light Bogg and Officer "Brittany" Angel conversed, with Siz in the trunk and having his screams of help ignored. Siz was then offered to Otto Delmar after he asked Bogg for body armor, claiming Siz's name was Armor.

Next, Siz was offered to Mr. Wang Chang and was introduced to him as James, since chat meta-gamed revealing his real name. Bogg then proceeded to take Siz to the Pink Cage Motel and explained the room and other town tutorial-like aspects, both legal and not.

Meeting Mother and The Family Edit

Siz met Mother on a tour of Facebook with Stevie. At the time, Stevie worked at Facebook and was conducting the tour for Mother and Siz.

This is a list of all episodes and major happenings for each one, this will help people catch up and know when certain major or minor events happened if they wanted to go back and rewatch.

Links to the VOD are located below the stream title.

Siz after dealing with a hostile local

Siz in his rejuvenation suit

Siz when he's bright and early for the races

Siz enjoying a bit of a drown in a pool

Siz digging through a dumpster for a quick snack

Siz posing in front of his "🍊 Tang Gang 🍊" colored Brawler

Siz with Al Saab testing out the Tommy gun

Siz with Speedy testing the LMG 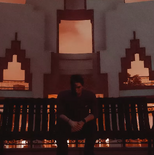 Siz in the season two trailer for NoPixel 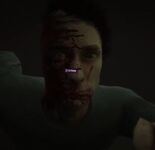 A close up of Siz drowning

Siz in his all black crime outfit

Siz posing in uniform with the other founding members of the HOA. 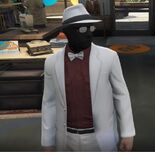 Siz in his Step Dab attire

Siz in his Step Dab attire, dabbing in front of his step-father's lambo

Siz looking out from the HOA headquarters.

Siz in the big house after being raided.

Siz getting accidentally ran over by Juan Carlos "Flippy" Hernandez 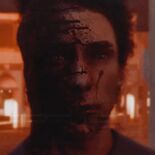 Siz's Closeup in the Season 2 Trailer

Siz outside the Court House

Siz in his preferred prison attire for long sentences 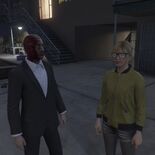 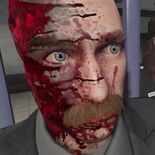 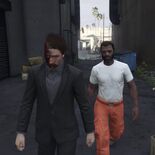 Siz after burning a prior set of clothes that were contaminated with various diseases, in addition to a new wig he began wearing in late February

Siz in his godfather appreciation jacket

Siz and Zelda in their complimentary godfather attire

Siz in his Shadow attire

Siz with Curtis and Ziggy

Siz with his sisters; (L-R) Tessa, Erin and Vivi

Siz and Kraytor in the Hogs of Anarchy vest, showing the prominent design on the back 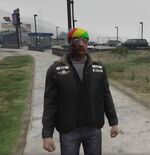 Kray-Tor taking a selfie after Julio got stabbed by Zelda feat. Siz

(L-R) Huck, Kray-Tor, Siz, Julio and their Old Lady in front of the Mirror Park Tavern. Photo taken by Zelda 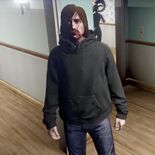 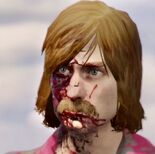 Siz, Erin & Marcus in prison together

Siz with Jacob (located behind the rear-most stacked pallets, taking a piss on a wall)

Siz and Huck outside the Taco Shop

Siz is in his Pimp suit, talking to Payne at VU Fight Club event

Siz and Flippy chill at the Richman Hotel

Siz with his two apes Chimp Caesar and Mighty Joe

Siz watching his chimps Chimp Caesar and Mighty Joe poop and fart on Daryl, Blaine, and Eggroll
Add a photo to this gallery
Retrieved from "https://nopixel.fandom.com/wiki/Siz_Fulker?oldid=53837"
Community content is available under CC-BY-SA unless otherwise noted.