Losing a loved one to sickness again

Forgetting to tie her shoelaces

Shirley Elizabeth Abigail Lemons is a cheerful, law-abiding citizen of Los Santos, who enjoys going on adventures with her husband Steven Hayes in the great outdoors. She enjoys exploring the whole island, but especially likes exploring the mountains. She is hardly ever away from Steven, and most times they can be found together frolicking around the city or deep in the woods. She is easily recognizable by her overalls and her bright red hair. Most times she is positive and easily excitable, and is known for her kindness and sincerity.

Shirley owns a orange Duneloader named Clementine, and has the license plate DARLIN. She also owns an orange Mesa Safari, nicknamed BeepJeep, with the license plate LEMNHAYS. Contrary to the color of her vehicles, Shirley is not part of SASAR, but has many friends that are.

Shirley owns two pets, a shepherd named Winnie the Pooch, and a chicken, gifted to her by her friends at The Green Agricultural Company as an engagement present, named Dorothy.

Shirley co-owns and operates LemonHayes, a seasonal business, which originally ran out of the booths at Dean World, created and run together with Steven.

Steven and Shirley own a house in Paleto together, and many days you can see decorations on the mailbox that Shirley has placed for the day.

Shirley grew up on a peach tree farm somewhere in Georgia with her father, mother, and two older brothers. At a young age, her mother passed away due to sickness, leaving a huge hole in her heart. But still, she had a happy upbringing, constantly surrounded by her loving family and spending a lot of time helping with the farm. She has mentioned to Steven that she was picked on at school because of her red hair, being teased and called "carrot head".

After the encouragement of her father to move away, she moved to Los Santos, where she worked as a tow truck driver. That is how she met Steven Hayes, and went with him on a Rooster's Rest "date". Unfortunately, soon after her cow Bessie got pregnant, and she moved back to the farm for 4 months.  As of July 13, 2021, Shirley Lemons returned to Los Santos, and reunited with Steven.

She grew up to be very sheltered and naïve due to her family being over protective of her. Even so, her life in Los Santos has toughened her up, and she is no longer as trusting as before. She values the relationship her father had with her mother, and strives to have a relationship similar to theirs with her husband Steven. Shirley mentions from time to time that her biggest role model is her mom, and that in the future she would like to be as good a mother as she was. 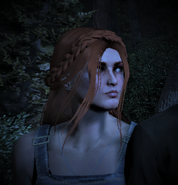 Shirley in her wedding dress

Lemon Dad (Posy Florian) and Shirley prepping for her wedding

Shirley in her red dress

Shirley in her camping gear

Shirley in her cozy outfit
Community content is available under CC-BY-SA unless otherwise noted.
Advertisement