Sherry Paie is a character role-played by Roxmiral.

Sherry Paie is the CEO and partial owner of UwU Café, and an Event Coordinator of Orpheus Entertainment (formerly National Paintball Association). Sherry is also still signed at her first old job, a receptionist at Pillbox Medical Center.

Enigmatic and mysterious, much of Sherry’s early life is unknown. The pieces she has alluded to indicate she is much older than she appears and may not be from earth. Sherry nonetheless considers herself a human and insists she was once entrusted by ancient Egyptians and is in regular communication with aliens. Though she talks in a robotic, monotone voice, moves stiffly and seems to have computerised logic-based responses in her interactions, suggesting she may be a cyborg.

Hard to read and at times mischievous, Sherry has been known to have a wry sense of humour and enjoys a friendly ribbing with her friends, especially when she turns the banter into literal interpretation, sexual innuendo, or horror stories. Sherry respects those who hold authority, especially with the PD. She also has a tendency to become aggressive to those who present a constant disrespectful attitude to her and will use her trusty weapon named Sherry Poppa when her patience is pushed to the limit.

Sherry is adept at handling jobs, much to the surprise of anyone who knew her as a goofball. Sherry was the former first Supervisor at Burger Shot, a Deputy Mayor for two terms under Abdul AlRahim mayoral administration, and now the CEO for UwU Café. With a good standing and experience at a government position, coupled with good relations with DOJ, Sherry has a hand in knowing the administrative side of the city. Sherry also volunteers as an EMS medic and self-proclaims being one of the founding fathers of the PD Tow.

Sherry hung around the Burger Shot for weeks, expressing interest in the drive-through position. Eventually she was hired by Ken-sama on the day of the Fry Gate scandal. She quickly learned the ropes through training under Burger Shot employee Valentina Hops. Like a cyborg, Sherry grinded through her work hours and eventually bonded with the Assistant General Manager Shelly Smith. Shelly saw her dedication to the company with her calling shots, ideas, and reports, and soon promoted her as her assistant.

Recruited by Robert Spowylamywanowski and Fingle Dan to become a ghost for his ghost hunting business, Sherry dressed as a ghost bride and was named Olivia Anarchy. Joining Kyle Brovloski who was wearing an alien suit, the two set themselves as ghosts of Mirror Park Tavern, where Robert conducted his conspiracy. As "Olivia" succeeded spooking the people at the Tavern parking lot, Deputy Barry Briddle felt brave and attempted to attack the ghost. Sherry, panicked, bonked him in retaliation and ended him instead. A cop chase ensued but Sherry and the gang escaped. "Olivia Anarchy" hasn't visited the Mirror Park Tavern ever since, but few sightings of her ghost has been seen near the Burger Shot pier.

Before Burger Shot could start a 'Fingle Con' costume event, Fingle Dan left the crew to do other things. This gave Sherry an idea to do a 'Sherry Con' instead, together with Oki Doki, Shelly, Maximilian Delicious, and Jeffrey Price. From what was a normal themed event for the day, it went south as Sherry went all in with the gimmick and brainwashed people around Burger Shot to become her. But just as Shelly and Jeff broke off from the spell, Linda Maridan and Oki fell under.

"We are Sherries. Lower your mental shields and surrender your mind. We will add your biology and personal distinctiveness to our own. Your body will adapt to service us. Resistance is futile."

Sherry and her new Sherries soon invaded and unleashed the 'Sherona Virus' at the Dean's World, multiplying more Sherries at an alarming rate. It caused Twatter hysteria, police chatter, and even gun fire around the pier, mostly shot in self-defense around Burger Shot and where it was a safe haven from the virus.

The spread of virus went to a halt when Fingle Dan arrived on the pier and sent off a good amount of Sherries into the water, successfully drowning the original Sherry. After police sorted the last of the Sherries who caused trouble, the Sherries visited an unconscious "Sherry prime" at the hospital and found themselves released from Sherry's control. The Sherries will return, wink wink.

A Chapter Closes, And Another Opens...

In June 2021, Shelly Smith was promoted to Burger Shot COO and institutes a management shake-up. Sherry was content with keeping the position she had, but Jeffrey Price's promotion leap frogging over her from Janitor to Head Supervisor left a bitter taste in her mouth because it smacked of nepotism due to his relationship with Shelly. During this time, Sherry also helped comfort her fellow colleagues Kitty Dream and Ash Ketchup, who both felt passed over for higher roles despite their commitment to Burger Shot. It was during these talks that Sherry helped in the inception of UwU Café as a competitor to Burger Shot, and she joined into the business venture as a partner with Ash as the owner. Meanwhile Kitty bowed out over disagreements with Ash despite mediation from Sherry, much to Sherry's dismay.

Later in early August, Sherry returned after spending some time outside the city only to find Burger Shot mired in trouble over several murders and a police investigation hanging over the establishment. Shelly confided in Sherry about the truth of the events and requested Sherry's help to untangle it, even offering the position of "Ass. to COO", but Sherry refused and insisted that Shelly needed to sort it out herself. The next day, Shelly demoted Sherry to Janitor over purported "nefarious activities". Sherry, livid over the decision, caused a ruckus in the restaurant fully expecting to be fired over it, to which Shelly complied.

Sherry spent the next few days stirring up a storm all over the city, spreading a series of damning truth and lies against Burger Shot and Shelly... and also presiding over Shelly's marriage to Jeffrey. Several Burger Shot employees, confused and alarmed with the info she was spreading, continued to confide in her, and Sherry learned that some of the "lies" she was spreading turned out to have some truth in them, including revealing the existence of the International Burger Society. Sherry also attracted police attention to her, being brought in for interrogation and receiving a request to subpoena her phone records.

A few days later with the police heat off her, Sherry decided it was time to fully move on from Burger Shot. Turning in her last held receipts, the final step left was to pull out the vehicles she had stored in the Burger Shot parking garage. Driving off one last time past the Burger Shot, Sherry lamented the moment was bittersweet, but was reminded that newer and better things lay ahead...

Salem Yellow approached Sherry to join the Abdul AlRahim mayoral campaign as a candidate for deputy mayor alongside him and Odessa Pearson, to which Sherry accepted after some consideration. With Abdul winning the elections, Sherry officially started her Deputy Mayor duties on August 27 2021 and continued in the role when the Abdul administration won a second term in the October elections. When Abdul came under investigation for alleged embezzlement, Sherry cooperated with the authorities where she could. Abdul was impeached on November 29 2021 and his administration was dissolved. Sherry celebrated her freedom from her Deputy Mayor role but would continue to help with the interim administrative duties where she could, while refocusing her efforts on being CEO of the newly opened UwU Café restaurant location.

The Lost MC, the War, and Ash

Sherry was challenged to take Reed Dankleaf's hand in marriage right after Reed's divorce court with Ryan Parker, which she gladly accepted. This was after days of Reed offering to marry her whenever he and a few Lost MC members visit the cafe. Flop Dugong, her then-current boyfriend, abruptly ended their romantic relationship after learning of their hasty wedding through a state-wide statement. #HEARTBROKEN. Now an Old Lady of the Lost through Reed, Sherry told her best friend Dawn Hearte, who is also an Old Lady, that she didn't want to know of their illicit activities. She was then recommended to stay with another fellow Old Lady and friend Lucille Hellman at Iron Hog Repairs.

The PRSS vs The State of San Andreas

Days after Reed and Sherry's marriage, the Lost MC declared independence from the state and government and called themselves the People's Republic of Sandy Shores. Sherry, who was new to the club, stated that she didn't want to become involved in the conflict because she didn't want to ruin her reputation in the city. She soon stayed out of Sandy Shores after the state announced that associates of the club will be tried for treason. However knowing the compound has less food and has been in lockdown for days, Sherry assembled individuals to sneak cafe food for their sustenance.

Sherry was distraught upon learning that her best frind Ash Ketchup, had been secretly brainwashed by the Lost MC President Rudi Rinsen and her husband Reed to join their cause. On the day of the siege in the 21st of January 2022, the Lost infiltrated the sound system of the city, and prompted the indoctrinated to arm and join them. Upon instruction by Ash's close friend Reggie Might, Sherry and Mari McKay together with Judge Nathaniel Greyson attempted to 'unbrainwash' Ash through emotionally torture, which then turned into trauma for both parties.

After the incident, Sherry and Mari admitted their mistakes and sincerely apologized in front of a horrified Ash, who was terrified at their presence. For days they kept their distance from her, with Sherry sitting at her old workplace at Pillbox. Sherry believes she would rather face the consequence of abandoning their friendship if it meant getting Ash to her normal self. Bit by bit, Sherry and Ash began connecting again through phone and later found themselves hanging together weeks after the war.

Sherry rides a wine-coloured, fast Issi Classic car as her daily transport. She also possesses a pink custom moped which has been modded with many mirrors and antennas. She owns a Green and Pink-rimmed Bogg bike which she sometimes finds herself injured riding it.

Sherry has a routine where she listens to a German song and flips people off while riding around the city. Unfortunately, people don't understand her routine and this offended Bryce and Erica, who ran her down with her car. 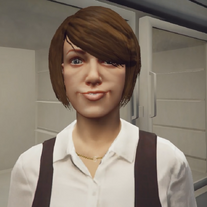 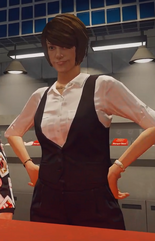 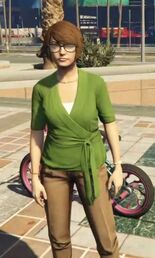 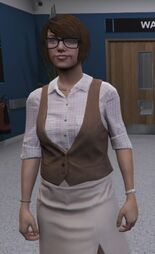 Rise of Sherries by Roxmiral 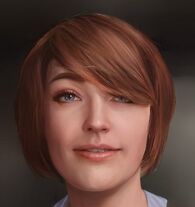 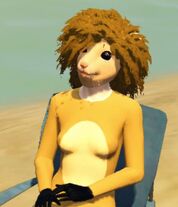