Shane Powers/2.0 and Prior

Shane Powers is a character roleplayed by JackHuddo.

Shane Powers was the Treasurer Dollerydoer of the Bondi Boys MC, however after Irwin Dundee left the group Shane felt it was time to do his own thing and left. Despite being nominated by Irwin Dundee to be the next "President" of the club, Jaxson Haze took the role as he was next in line following the club's hierarchy. Shane left the club with fellow club member Davo Gumtree, and had initial plans to start a repair/rentals garage named Pink Slip Customs, with the inspiration coming from the club's prior aspiration; True Blue Customs. Although, these plans fell through.

Shane now owns the Overboost Drift School, after becoming close friends with the prior owner Tommy Cruizer. As the owner, Shane employs trainers to do drifting lessons as well as doing them himself. Shane's driving skills have also improved immensely as a result of a lot of practice in both get-way driving and drifting; "You've got to be the best to teach other to be the best."

Despite growing somewhat stale towards the "legal life", Shane is still hanging in there and not committing any violent felonies that could provoke the loss of his business license. In saying that, Shane as of lately has been pushing the limits by getting into chases with the police, flaunting his drifting ability and at times not caring about having his identity known.

With the BBMC being reborn once again by Irwin Dundee, it's unlikely that Shane will be re-joining, as upon meeting with Irwin and seeing him in the club's denim jacket, Shane exclaimed; "Fuck no" and "You've got to be kidding me c***." Although, this may or may not change in the future.

Shane claims to have eyebrows, but this is yet to be proven.

It is also rumoured that ShaneO's mullet is actually a wig and has been ever since he got blown up by the Reverend.

ShaneO's new appearance. ShaneO sought out a world class plastic surgeon, as he felt he was no longer pulling as many hot blokes as he did in his younger days. The surgeon was able to use some of ShaneO's [REDACTED] of which he still had plenty, despite already having used a large portion of his [REDACTED] for skin grafts on his arms, The surgery left ShaneO with a almost prepubescent appearance and eyebrows for the first time in his life. It has not been confirmed yet if his mullet is still a wig. 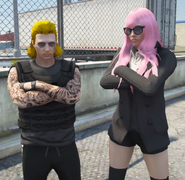 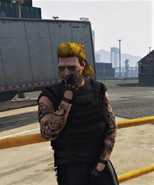