Dispatch FTO
Sexton Hardcastle is a character role-played by bythybeard.

Born in British Columbia, Hardcastle is an avid NHL fan and wanted to become a hockey player at a young age, his father was an RCMP officer and always dreamed of his son to follow in the footsteps of his family of law enforcement. Hardcastle wanted to be a hockey player though and his father supported his dream. Until one day Hardcastle blew his knee out and had to step away. After the injury, Hardcastle traveled around to find something to strive for before landing in Vice city, during his time in Vice City he applied for the local police force. He was hired as a cadet and made his way up the department, he was forced to take a medical LOA forcing him to step down from VCPD and move to Los Santos. Once he got the opportunity to become a dispatcher his goal is to have a chance at becoming an officer once again. He is also a huge fan of Dragonball. 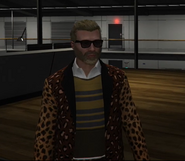 Add a photo to this gallery
Retrieved from "https://nopixel.fandom.com/wiki/Sexton_Hardcastle?oldid=68317"
Community content is available under CC-BY-SA unless otherwise noted.