Sergei Sazkaljovich is a character role-played by aleks.

Sergei Sazkaljovich came to Los Santos from Russia in hopes to become a better man, after his past with the Комите́т Госуда́рственной Безопа́сности (KGB).

Sergei became a taxi driver as a way to make money, so he could send it back to Russia for his wife and children. He was pretty good at his job, claiming he was the "number one taxi driver in the world".

Life as a taxi driver was not easy, as his prices were cheap, and he was prone to crashing. Customers felt bad for paying for such low prices, that they would tip him extra. At one point, Sergei purchased a car and attempted to start his own Uber service. However, he went back to his taxi driver jo and spent a lot of money on upgrades and customization for his cab.

Over time, Sergei got caught up in the life of crime and tagged as "violent" in the police database. Sergei also began selling drugs on the streets, and actively carried illegal guns.

Sergei's wife, Vika Sazkaljovich, still resides in Russia; however, his son, Vasily Sazkaljovich, and daughter, Olga Sazkaljovich, opted to move to Los Santos to seek out their father. Unfortunately, the family has yet to be reunited.

Vasily is the youngest of Sergei's two children. Sergei tells people that Vasily is "7 years old", and that he spends all of Sergei's hard-earned taxi money on Fortnite "V-Bucks". In reality, Vasily is 19 years old (however, the V-Bucks story is the truth). The reason for Vasily's age confusion is due to Sergei never being around for Vasily's childhood. Sergei worked so many long days that him and Vasily never truly had an opportunity to have a good relationship. After Vasily turned 18, he decided to move to Los Santos to Sergei about the family problems that have generated over the years.

Olga is Vasily's older sister, roughly a decade in age difference. While Sergei tells everyone that she is 19, she's actually much older and she constantly argues with her brother about whos the oldest sibling. Olga is very smart, and worked for a bank in Russia, before moving to Los Santos.

Bogg Dann was Sergei's taxi nemesis, and the two were always at each other's throats regarding who the better taxi driver was. Despite the rivalry, the two did seem to genuinely care for one another, to some degree. They had a therapy session with Kizzy Neveah once, and though it looked like the two were able to vent out their frustrations with one another, they were immediately at each other's throats again once they left the premises. The therapy seemed to have helped a bit, during a situation where Sergei's life was threatened, Bogg refused to leave his side, vowing to protect him. However, the situation ended with Bogg being shot multiple times, and Sergei was kidnapped. The two men have not seen each other since.

Judd Lincoln is Sergei's best friend. The two were able to hit it off pretty quickly and enjoyed going on adventures around the city. Both of them cared for each other quite a bit. At one point, Judd and Sergei were traversing Mount Chiliad in Judd's truck, when it lost traction, and careened down the side of the mountain. Judd was sent flying through his windshield, and Sergei spent most of his time trying to locate his friend, before bleeding out.

Judd was the first person Sergei talked to, following the Jacob Harth incident (below). While Sergei was talking to him, it was clear that Judd valued Sergei's life over everything else. Judd's advice was to move on, and to forget revenge; saying Jacob was simply too powerful of a foe for Sergei to face. Currently, Judd is helping to look after Sergei's son, Vasily, in his absence. Even now, Judd is still fiercely protective of Sergei; threatening to kill anyone who speaks ill of him.

Sergei and Jacob Harth's relationship is purely antagonistic. While riding around with Bogg and Yung Dab, the trio spotted a black car on the side of the road; the car's engine was running, but no one was inside. Upon closer inspection, they found that the trunk was filled with guns and other dangerous items. Sergei was in the middle of hot-wiring the car when the Leanbois showed up and pointed weapons at Yung Dab and Bogg. The Leanbois explained that the car didn't belong to them, but that it belonged to someone "much worse" (Jacob Harth). When Sergei managed to finish hot-wiring the vehicle, he didn't take heed of the Leanbois' warning and fled the scene in his newly acquired car.

After Sergei left, the Leanbois took Yung Dab hostage, demanding that Sergei return the stolen vehicle. Sergei and the Leanbois met up, the exchange of Yung Dab for the vehicle was made, and the situation seemed to be resolved. However, that evening, Bogg admitted to stealing a lighter from the car, and he had mentioned Sergei by name to the Leanbois. Hearing this information, Jacob gave the Leanbois an order to kidnap and bring Sergei to him.

The Leanbois followed through with Jacob's demands, handcuffing and shoving Sergei in their car's trunk. When Sergei was delivered to the location, Jacob made it clear that he was dangerous. Jacob's original plan to burn the car with Sergei in the trunk fell through (due to the lack of a lighter), Jacob pulled out a gun and "finished" the job. Unbeknownst to Jacob, Sergei used his knowledge from the in extensive KGB training. Sergei was able to act on the proper emergency procedures in order to survive the gunshots, and after stabilizing his injuries, he quickly went into hiding.

Sergei and Maximilian "Yung Dab" Thoroughbred were good friends, though Sergei never participated in any large criminal activities with him. The "biggest" crime job that the two worked on together was a mission by Iroquois "Snake" Plisken. After the job was done, Yung Dab left Sergei stranded on a beach. Despite that, Sergei still considered him a friend, and according to Sergei, his children are big fans of Yung Dab's music. 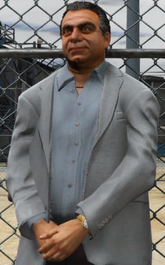 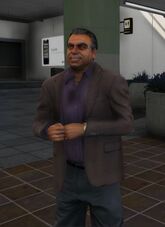 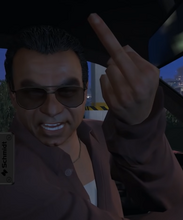 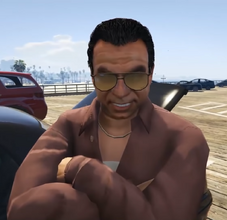