In a relationship with Boe Jangles

Paramedic
Sarah Ableton is a character role-played by tara_.

Formerly a Paramedic. Currently dating Boe Jangles. Often smokes weed, though not on duty. Was fired from her job for tampering with drug testing and testing positive for cocaine.

Sarah was involved in the kidnappings of Hedi Saurus and Khloe Brooks and sending them into ICU for a time. However no one really knows except for the Criminal Investigation Division, who have a good idea that it was her in both cases. 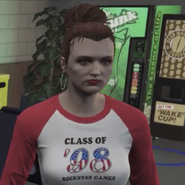 Add a photo to this gallery
Retrieved from "https://nopixel.fandom.com/wiki/Sarah_Ableton?oldid=31151"
Community content is available under CC-BY-SA unless otherwise noted.