Sana Satoru is a character role-played by SanaUchiha.

'Sana Satoru' is on her journey of self discovery and making up for her past life in New Zealand. She was born into a notorious gang and due to the death of her fiancé she ran away and gave up on that life. Sana changed her appearance and is often seen wearing a mask or glasses so that her identity is not revealed. Her life previous to Los Santos was controlled by her father, and her every move was decided for her. This makes her very indecisive and naive. Sana’s controlled upbringing also affected her way of thinking, almost as if she’s programmed to listen to any instructions given to her by people that have a sense of authority.

Sana is still unsure of how she should be living now that there are no restrictions in her life. She has a lot of trouble expressing herself through words, so she tends to express herself through her music.

Sana’s past is dark, yet she is a very bubbly person, she is sometimes shy but always tries to make conversations with new people. She finds joy in welcoming new people to the city, she likes teaching them new things and taking them on adventures around the city.

Sana can also be very possessive over her friends/family. Some of her closest friends have picked up on her 'Yandere' tendencies. In the past Sana was never allowed to socialize or make friends, so when Sana makes close connections with people she becomes fixated on the idea that they belong to her and nobody else. Sana not only has obsessions over people but she also has obsessions over objects.

Sana Satoru is currently signed to Wu Chang Records, she was previously signed to Downbad Records. 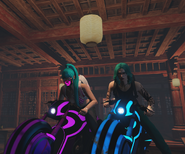 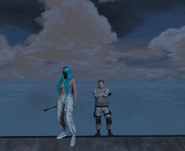 Concert at the Free Your Mind Festival
Community content is available under CC-BY-SA unless otherwise noted.
Advertisement