The SASPR is an autonomous department of the Los Santos Police Department and San Andreas State Police in which Kael Soze, Tony Andrews and Sam Baas are High Command.

Beaver Bush Park Ranger Station which is located at Baytree Canyon Road & Marlowe Drive in Vinewood Hills. This is where all the highly secure investigations by the rangers take place. The station has two floors, with the bottom floor containing a reception area and cells, and the upper floor containing a meeting area and an office area.

Raton Canyon Ranger Office which is located at Great Ocean Highway & Raton Pass in Chiliad Mountain State Wilderness. This is planned to be the base of operations of San Andreas Search and Rescue.

The first two requirements are necessary to join the department, however, the Commanding Ranger or Head Ranger recruiting can overlook this fact if they wish.

Tessa "The Ghost of Chiliad" Lamb

Ranger Barry and
Soon to be Ranger Perkins

Barry Briddle
Living up to his name

Jerry Perkins with BJ after long day up North

Barry and Jerry dancing under the moon

Tessa Lamb
The Ghost of Chiliad 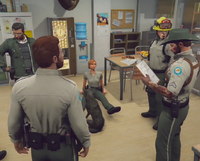 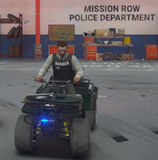