Ryann Devereaux is a character role-played by Evee.

Information outside of the scope of the character's knowledge (Meta) is not included in this character page.

Kidnapped by the Tramp

About a week before 1/19/2021, Ryann and her friend were kidnapped by "The Man With The Smile," assuming to be Kenneth "Mr. Smiley" Jesperson. He drove them up north to a smelly area underneath a bridge near the highway. There was a cluster of homeless people in this area. "The Man With The Smile" lead them to a shack, with the only light shining through the cracks of the shack's walls and ceiling. He kept Ryann, her friend, and one other person there for about a week.

Ryann and the others were chained by the wrists and legs inside the shack. Ryann figured out how to loosen these chains and headed towards the door. "The Man With The Smile" walked in, took his knife out and carved deeply into her face. Her mouth and cheeks was cut into the shape of a Glasgow smile that almost reaches from ear to ear. After he was done with her face, he carved a smiley face into her back with the same knife. "The Man With The Smile" put her back into the chains and "tightened the chains until it felt like my [Ryann] wrists were about to snap."

"The Man With The Smile" would force Ryann and the two others to drink absurd amounts of alcohol very consistently throughout the week.

He would "play nice" with all three victims, constantly reassuring them that they are good friends and he is taking care of them, even when he's torturing them. He would also repeat to each victim, "You belong to Mr. Smiley."

Ryann was later separated from the two others that were in the shack with her. "The Man With The Smile" would practice cutting on Ryann and the two other's backs. She could hear their screams of pain and agony, always worrying when it was her turn to be tortured again. It felt like the screams never stopped.

Ryann was never fed during her time in the shack, leaving her extremely malnourished. She kept trying to fight back against her captors which is the reason why she was never fed. Ryann knew that other two were being fed while they were in the shack and it was just her not getting to eat.

The information relayed in the section "Kidnapped by the Tramp" was given to Senior Deputy Jenny Hall on 1/19/2021.

On 1/19/2021, Kenneth "Mr. Smiley" Jesperson finished up the planning for his "Final Manhunt" and started putting it into motion.

"The Man With The Smile" released Ryann from her chains and lead her outside the shack.

"It was so bright outside, it hurt my eyes... Everything was loud, there was so many cars, right by the highway. So many people just passing by while we were there and had no idea, not that they would've heard our screams anyways." - Ryann

Ryann has little to no recollection of events that occurred the hours she was outside the shack.

The only encounter she remembers is:

"There was this girl, with a ponytail. I remember seeing it swish, swish, because I remember my hair doing that before he ["The Man With The Smile"] cut it. She was really nice and asked if I needed anything; 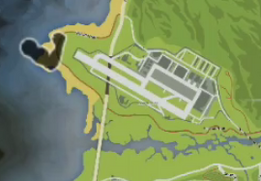 The Beach was off of Great Ocean Highway, west of Fort Zancudo. A 10-10 Call (Fight in Progress) was reported at this location. Solo Cadet Daisy Dukakis and Senior Deputy Lauren Forcer were the first to arrive on scene.

They witness Ryann holding Amelia Jones at knife point. Lauren and Daisy have their guns drawn and Ryann screams "Where is he? Where is he?" in a panicked tone. Ryann mumbles "He's not here, he's not here, I know what I'm supposed to do." Forcer keeps trying to deescalate. Ryann finally says, "Where is The Man With The Smile?" and stabs Amelia in the lower back.

Forcer and Dukakis neutralize Ryann by shooting her. Ryann lays on the ground, confused, on why "The Man With The Smile" didn't show up.

Ryann is transported to the hospital and treated by Doctor Daniel Rodgers for multiple gunshot wounds, a punctured lung, damaged arteries near the lung with a large amount of blood loss (externally and internally). She is treated for the wounds that she suffered while she was tortured in captivity as well. She also shows signs of being highly intoxicated.

Deputy Kevin Keyte monitors Amelia Jones and Ryann while there are in surgery. Ryann is then moved to the ER where she slowly starts to wake up. As Ryann wakes up, she starts having a panic attack. She is questions where she is and exclaims that she "doesn't want to be here, get me out!".

Kevin calls in Senior Detective Jenny Hall and Psychologist William Thatch to speak with Ryann. Ryann gets out of the hospital bed and continues panicking as she is crying and breathing heavily.

Jenny Hall starts to slowly explain why she ended up in the hospital. She assures Ryann that she is going to be alright and that she is in safe hands. Due to Ryann's aggressive panicking she starts to cough up blood. Jenny managed to get her back into the hospital bed and let Doctor Rodgers continue to work on her.

Jenny Hall manages to keep Ryann calm while in the hospital. Jenny calmly asks questions to Ryann, which Ryann provides her experience when being kidnapped for the past week.

Jenny Hall tried asking about Ryann's past, before the kidnapping. Ryann becomes agitated and exclaims that she is not allowed to talk about. If she talks about it she'll get hurt.

Jenny: "Do you really think him as a friend or are you scared?"

Ryann: "That's what he said, we were friends... Maybe not, I don't know. I don't know anymore. You said friends don't hurt friends. Sometimes they do.

Jenny: "Only enough to cause them to scream to scream and cry Ryann?"

Ryann: "When your mouth gets cut like this it's hard to scream. Your body wants to react to the physical pain that's happening but all it does is just reopen the scars. They never heal. It's just constant agony."

On 1/19/2021, Senior Detective Jenny Hall and Psychologist William Thatch has deemed it unsafe to move Ryann to MRPD and/or Parsons due to her current injuries and mental state. She is being held in a private ward in Pillbox Medical Center and being monitored by Doctor Daniel Rodgers.

On 1/30/2021, Kenneth "Mr. Smiley" Jesperson, was not charged with the forced labor, kidnapping, and the torturing of Ryann and the two others that were in the shack with her. In fact, all three individuals were not mentioned in Jesperson's court case at all.

Justice was not individually served for Ryann that day.

On 2/1/2021, Kenneth "Mr. Smiley" Jesperson was sentenced to life in prison with the first 45 years spent in Maximum Security. 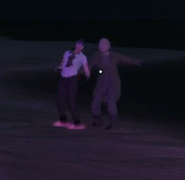