Ryan Winters is a character role-played by Nescoh.

Ryan Winters is a former Law Enforcement Deputy from a different county, he served the Sheriff's Office for a year before resigning and moving to Los Santos to pursue a different career in Corrections.

Winters believes in most lifers for a chance at rehabilitation. Often can be seen getting along with the lifers and temporary inmates to try and get to know one another to better understand how to present himself around each one of them. Winters is known to be one of the more caring corrections officers as he would rather focus on the good in people rather than treating them like garbage for their wrongs. Although he holds no bias for any of the inmates, he'll always do his job and follow orders from superiors but always looks out for the inmates as a mediator between DOC and the Lifers to be sure their voice is heard and not ignored.

He was accepted into the Department of Corrections on 10/15/2021 as a Cadet and made it to Solo Cadet on 11/19/2021. Winters was terminated from DOC on 12/13/21 for attempting to rehabiliate inmates and also trying to turn Elizabeth Byrne's life around and giving her advice on how to correct her life and to be better, as well as questioning superiors orders.

Back in his hometown, Winters was engaged to a girl named Autumn. Autumn was a criminal who usually committed crimes ranging from Possession of Illegal Weaponry, to sometimes fighting and getting violent with others. Winters would often be her arresting officer and constantly try and remind her that she's better than this and doesn't need to do crime since he had a good paying job and lots of money. Autumn however kept ignoring these warnings and the two ended up separating due to her love to do crime. After their break-up, Autumn got into more serious crime like Bank Robberies and Winters had resigned and moved away.

During Winters' time as a Deputy, he befriended a dangerous and well known criminal in the past named "Red", formally known as Yuliya Solokov. A russian gang member apart of a Street Gang known as The Bloods. Solokov and Winters became very close and it ultimately conflicted with his Police Work as he would have to submit reports on the gang including her. At the end of their friendship, Solokov was worried about Winters and his girlfriend, since this was before they were engaged. Solokov stressed that he needed to "watch out for his girl and keep her in check so she ain't doing anything stupid." Winters had agreed and Solokov told Winters that Solokov and her boyfriend 'Mikael' were going to leave everything behind and get out of the hood to live a happy life. That was the last time the two spoke, and days later Solokov along with Mikael were both found dead on a beach. Facts leading towards being murdered by their own gang leader.

While Winters was still a Solo Cadet, Elizabeth Byrne was sentenced for a HUT Charge on Serial Assaults and Killings. Winters had initially been sort of afraid of Byrne until he saw a good side of her. Which taught him more about understanding even the most damned criminals in the city. Lizzie was known to most Corrections Officers to be violent, aggressive, and ruthless. She has gone as far as shooting Connor Stubble in the front of visitation and threatening several DOC of their lives. Although Winters is aware of these situations, he chose to take it upon himself to try and reach out to Byrne to try and give her advice on how she should move on from this and be a better person. A deep conversation happened between Winters and Byrne where he had explained to her the choices she had at the time. Either she could continue down a violent and dark road, or Byrne could try to reform herself and potentially turn around into a new person. Winters was content on flipping her around into an upstanding citizen although she still seemed into continuing her crime spree. Winters had offered to adopt her for moral support and generally someone she could talk to if ever needing advice or any sort of aid to help her in dark times.

Winters had felt he was breaking procedures a little when this had occured and told his commanding officers that he would withdraw the adoption for a later date if Byrne was to change her act up, but personally told Byrne he was not going to give up on Lizzie like Lily Pond did in the past. Winters thought Pond was acting inhumane and like a bad person for abandoning Lizzie and added that it may very well be one of the reasons Byrne had gone down a dark road. Additionally Winters genuinely explained to Lizzie his thoughts on her as a person saying that she deserves at least a portion of respect from DOC while in the facility and that he'd personally try to fix her himself if he was given the chance to. 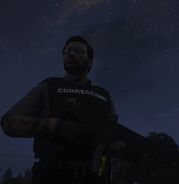