Ruby "Roach" Lee is a character role-played by Jogiiee.

Originally named Ruby Lee, she was given the name "Roach" after falling from a plane into a nest of hungry cockroaches. She almost always sports a Gingerbread Mask made out of Sugar Cookies. She also keeps a pet roach in her apartment named Papa Roach, described as a monster-sized roach. Ruby is hoping to one day teach Papa Roach how to rap.

After boarding a plane piloted by Mad Dog Majima, Ruby had flashbacks to the numerous car crashes she had experienced earlier that day with Majima behind the wheel. Suddenly becoming fearful for her life, Ruby ejected herself from the airborne vessel in a panic and plummeted to the ground below, deciding that to be a safer alternative to a possible plane crash at the hands of the mad pilot. Her would-be fatal impact was interrupted, however, cushioned by a multitude of cockroaches she happened to land on. The fall was witnessed by concerned citizen, who dialed 911 immediately. When EMS did not show up right away, they began to drive their car around in erratic circles, hoping to catch the attention of the ambulance drivers to alert them of her location. While their efforts were heroic and eventually successful, they failed to notice the swarm of cockroaches around Ruby as she lay bleeding out on the pavement, attracted by the lure of the Sugar-Cookie Mask she wore.

The exact details of what transpired between Ruby and the cockroaches are unknown, and the extent of the transformation she underwent both physically and mentally are still a mystery. The only part that is known for sure, is that sometime between the fall and EMS arriving, Ruby began her fateful journey to becoming the "Roach Queen", and Ruby Lee was never the same again.

When EMS finally arrived at the scene some twenty minutes later, Ruby was still under a swarm of cockroaches and covered in bite marks, much of her mask eaten by the creatures surrounding her. The EMS workers cleared out the cockroaches and began to treat Ruby, shocked by what they called the many "blemishes" on her face, which were actually bite marks left behind by the cockroaches. Much to their surprise and disgust, they watched a cockroach crawl out of Ruby’s open mouth. Concerned, the workers inquired if she had been eating the cockroaches, to which Ruby neither confirmed nor denied, instead, deciding to offer them what would become her signature recipe, Cockroach Muffin. This, of course, only caused the EMS workers to become even more concerned, and after profusely rejecting her offer, they immediately rushed her to Pillbox Medical Center.

After arriving at Pillbox, she was treated by Doctor Kennedy. In the middle of the procedures, one of the EMS workers bring up a story about Selina Kyle from Batman Returns, recounting how Selina was thrown from a building to her death, but was brought back to life by a bunch of cats licking her face. She then asks Doctor Kennedy if Ruby would become "Cock Roach Woman", suggesting that Ruby had actually died and that the cockroaches were biting her face to bring her back to life. Doctor Kennedy give a more realistic explanation; the cockroaches were just feeding on her face, not bringing her back to life. Ruby, however, latched on to the EMS workers idea, excitingly asking if she would become the "Cockroach Queen". Enthralled by this, Ruby brings up her Cockroach Muffins again, changes her nickname from "Cupcake" to "Roach", and says her catchphrase for the first time, "All Hail the Roach Queen!". This entire time on the examination table, Cockroaches continue crawling around from under her.

As Ruby walks out the door of the hospital, she stops to talk to a stranger, and yet another cockroach crawls out of her hair. This prompts Ruby to explain what happened to her and ask the man if she was part cockroach now. Unsure of the answer, the man asks if she has any special powers now, and suggests that as a test, Ruby should see if she can survive eating trash out of the nearby trash can. Ruby does so, and after eating the trash, the man asks her if it tastes good. Ruby says no, but comments that she does not feel sick. The man takes that as confirmation she is now part cockroach and has powers, one of them being the ability to consume trash without getting sick or dying, and that she should be a superhero. He christens her "Ruby Roach, Protector of the Night, Scurrier of the Day".

At one point she refers to herself as Sub-Human Roach Queen later contradicts herself by saying she is part cupcake park roach, so it is currently unknown what her true species is. Whether she is a roach-human hybrid with no cupcake in the mix, cupcake-roach hybrid with no human parts, or simply a regular human with severe brain damage, is unknown at this time.

On Ruby's first day in the city, she was hired on the spot by Shelly, who was impressed by her dedication and advertising of Burger Shot before even being hired, bypassing their unusual interview process of taking a selfie with a mountain lion. She was hired as the "Sweet Specialist" where she specializes in baking Rimjobs & Creampies, and dancing outside to attract customers. It was at Burger Shot she first met Jack Cortair, who celebrated finally meeting another "Cookie Person".

Ruby has yet to introduce her true specialty, the Roach Muffin, to Burger Shot. 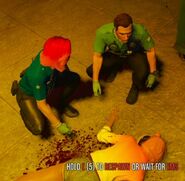