Leah Strong
Rose Edwards is a character roleplayed by Lovinurstyle.

Rose Edwards is a character roleplayed by Lovinurstyle.

Rose came from Liberty City to start over. She used to work for a company called, “Cardinal Recruiting” and worked as the secretary for John Carpenter.

John was hurt, slipped into a coma and was later on murdered. Driven away, she left Liberty City in hopes of starting fresh and began her journey in Los Santos. Rose started looking for a similar job when she met Uchiha Jones, Ramee El-Rahman, and Melbert Rickenbacker, and was later on hired at Uchiha Enterprise as his personal secretary.

Rose got hired as Uchiha Jones' personal assistant at the Detective Firm.

Rose started her own personal assistant agency in the city and started running errands for the Doctors and EMS staff at Pillbox Medical.

Rose met Matthew Payne, and he managed to get her a job for Payne Real Estate as an Interior Designer. Rose was also given permission to shadow Milton and Max while they show and sell homes. She is slowly learning a lot about real estate and hopes to be able to sell them soon!

Rose also became friends with Allen Widemann and he offered her a job at PDM to sell and make vehicle payments.

Rose had an event at the strip club to find "love with a bank robber", and Ramee ended up winning because he was the only one who volunteered. Both of them got into a relationship together after the event, but when Matthew Payne found out, he didn't agree to their relationship and threatened to fire her. They "ended" the relationship in front of Payne, but behind his back went into a secret relationship so she could keep her job.

Soon after the Dating show, it seemed like Ramee has other interests and didn't give Rose the time of the day. 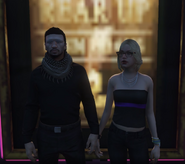 Ramee and Rose After "love with a bank robber" event

Retrieved from "https://nopixel.fandom.com/wiki/Rose_Edwards?oldid=91891"
Community content is available under CC-BY-SA unless otherwise noted.