“The rooster flies over nest with egg in hand."

Rooster Cab Co. is a taxi company operating as a subsidiary of Nest Holdings, which is owned by Lang Buddha. It is based in the current Rooster's Rest building, and was recently re-opened with the main intention of being used for laundering money.

After being closed for some time, Rooster Cab Co. was re-established on March 27th by Lang Buddha, primarily to be used for laundering money. A business account was set up for the new RCC, and Petunia Brookshire was appointed as the CEO later that day. Plans were made to hire some taxi drivers who will be frequently depositing money into the account to make the business appear legitimate. 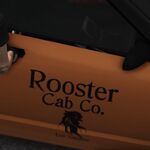 RCC Cameo in “A Peek Into NoPixel” trailer

“The rooster flies over nest with egg in hand."


Rooster Cab Co. is a legit taxi service used to hide nefarious activities of a school used to train people to succeed at illegal activities for only those that gain approval of the management. It was based in the building that is now the Rooster's Rest.

Even before becoming an official Leanbois member, Ellie and Lang Buddha have suggested the idea of creating an official 'crime school' after Buddha's brief stint training Ellie and OTT in a similar 'school' until being raided by police and realizing the hard way he must keep his activities hidden.

In a move to drift away from eternal turf-wars in the south-side of Los Santos, Ellie and Buddha acquired the building for this new endeavor in secret, and were looking at having Mother run the business as a taxi cab company "legal front." Some of the employees will do legal work, and specific picks who are interested will also be included in their undercover crime school (located in the downstairs portions of the building).

Mother jumped at the opportunity for herself to find a new purpose to create new links within the city as well as re-establishing old ones. She quickly got the approval for the business license, and went about fundraising for the company. Due to her recent absence, Ellie and 'Billy Davis' (Buddha) have taken the lead on interviewing potential employees and hiring evaluating progress.

Tessa Lamb was recently asked to be involved in creating a specific taxi evaluation portion of her driving school for the new/potential employees and has begun this opportunity with those chosen so far.

Buddha & Ellie also recently required the help of Sun Moon, as a Business Advisor. They want him to help with the legal and illegal side of the business and help bring more attention to the company.

Several propaganda videos were created by Buddha and Ellie to generate buzz about the crime school. Terrorist videos showing the explosion of the FIB building were submitted to the dark web. The video explained that a group known as "Talon" would take the city from the corrupt, they promised to give the power back to the people of Los Santos. Talon promised that blood would be shed and the police would learn to survive. "We are everywhere, we are everyone, fear us for we lurk in the shadows. We are Talon."

RCC Cameo in “A Peek Into NoPixel” trailer

Siz outside of RCC with Mother and Payne