Roman "Professor Galactic" Shacks is a character role-played by GalacticDPN.

Roman is a nervous and shy individual apprehensive about talking to new people. He also might be a war criminal, but refuses to elaborate further.

He is a detective turned private investigator who sees the world in moral shades of grey. He believed in law and order as an officer, serving alongside his partner and wife. Roman grew up in a decrepit neighborhood  where domestic disputes and gunshots and sirens were common background noises. With no father in his life and a mother who worked too much and was sick more often than not, the only real stability and order in Roman’s life were the police officers who commonly came down to the block to keep the peace. They played ball with him, talked to him about school and life in general, and were again the only people in his life who made sense of things. Without any other direction to go in Roman aimed towards a career in law enforcement as he grew up; he saw police officers as people who make put things in place where normally there would only be disarray, and he didn’t want to be in the gang life like he was sure his dad was, though his mom never talked about it. Unfortunately due to his home life and surroundings Roman had a hard time fitting in in a civilized world and got into trouble at school often, not out of malintent but just because he didn’t know how to be any better. Thankfully he had teachers and the few police officers who stuck around to keep him on track, and eventually he graduated high school and entered the police academy.

In academy discipline was taken much more seriously than in high school, and it was clear from the start Roman wasn’t going to make it due to his nature. When it came down to it he just couldn’t follow structure and liked to talk back, and recklessness and belligerence came much more naturally to him. Roman knew if he didn’t change soon he’d lose his only chance to be better.

Thankfully, Roman met a girl in academy who got through to him. She talked to him about how everyone has bad habits and fatal flaws they need to learn to manage, and if he really believed in something he would have to learn to deal with the problems he creates. She encouraged him to find outlets to channel his negative behavior, so Roman took up boxing and stand-up comedy, so he could fight and talk shit in ways that were actually...healthy.

With her help he managed to graduate academy, and he grew to care for her deeply, and she was there for him when Roman’s mom died shortly after graduation.

Unfortunately, Roman’s upward turn didn’t last forever. Roman did land a job with a police department alongside her, but they couldn’t be as close as they were in academy, if at all, and Roman didn’t have the lifeline he needed.

She rose through the ranks while he constantly managed to barely avoid being fired, and he began to resent her for it. He struggled for a while to fit in with his department but stuck with it, chasing after her coattails to be by her side, landing a position within CID due to his inquisitive nature and deductive abilities.

Roman’s life was gutted from the inside when she left him and the police department for a gang leader she was arresting, without so much as a goodbye. Roman couldn’t cope; everything he believed in, the woman who made him happy, and the system of justice and morality didn’t make sense to him anymore. How could anything of that mean anything in the face of the abandonment he was feeling? Shacks coped poorly by turning to drugs, alcohol, and dark humor, ironically using some of the people he’d arrested as connections to the drug world. He knew he couldn’t keep his career in the PD going, as short as it was, so he resigned before he was fired.

Obviously drugs and alcohol are expensive. Roman knew what he was doing was unsustainable and that he needed to turn his life around, and more importantly, he knew he needed a sense of purpose that utilized his skill set. But he couldn’t do any of that where he was; too many bad memories and emotional baggage was dragging him down, and he needed a clean start.

One thing lead to another, and war crimes maybe happened.

Then Roman flew out to Los Santos, with the intention of working as a private eye with his apartment as his office so he could still use his detective skills (sort of) but with less red tape, and could keep his darker habits going, somewhat less destructively.

Roman is/was/failed at trying to keep his nose clean and possibly pursue redemption, where he applies himself to public service and becomes what he always idealized. Depending on how things play out in the first few days of any given project/ambition, Roman improvises along the lines of who Roman meets, where his goals lead him toward public service or war crimes, while his self-destructive habits bring him down to getting the entire city high on drugs.

Roman is an innately good person who does a lot of self-destructive things because he doesn’t really know how to value himself, or control his tendency to accidently and sometimes intentionally commit war crimes. However a lot of the people he meets do see that deep down he’s an alright ) person, and interactions like that are as rare as they are wholesome and do keep him going at the worst of times. Roman doesn’t give up on trying to be better, or on making things better for himself and others, even though he suffers from a level of depression, moral guilt, and constant sense of loss. These afflictions drive him towards the darkest times, which is when he learns to burn at his brightest.

As they say, comedy is born from tragedy so Roman’s depression translates to a good sense of humor, and humor is a powerful political tool . As serious as his life has been, he doesn’t take many things too seriously, which makes it easy to get along with him, except when he's being obnoxious, which is a lot of the time. His attitude often annoys and irritates more serious people in serious positions, such as higher ups in command in PD, EMS, and on the other side of things, gang leaders who demand respect...so Roman keeps his interaction with such people short before things get bad for him, hence why he avoided Mr K indefinitely after accidentally putting out a hit on the leader of Chang Gang, and why he avoided Lang Buddha for months after learning what (specifics retconned) happened to Meowfurrion, and after stumbling upon Stratum Knights Investments.

With people closer to the ground-level of things, Roman is someone who listens more than he talks and that makes him decent company. He’s almost always trying to crack a joke, often dry humor, and for serious situations that absolutely require serious thought he is more quiet and concentrated, planning steps ahead trying to take into account how people will act and react to what he does. If he's doing major mainstream crime, which he doesn't do, Wrangler, he's in the latter mood while listening to his theme song, which is pending at the time of this writing. So it's really the Death Note OST for now.

Roman tries to constantly be on the move, going from one lead and/o project to the next, essentially one person/group to the next, getting straight to the point about what or whom he’s looking for. This also means that if he stays in one spot too long he gets irritated and impatient, which makes it hard for him to truly connect to anyone he meets, or for the people he does connect with to keep up with him. Part of that is by design; the one person he connected with abandoned him painfully, so by constantly moving forward, person to person, he’s running from his past. Eventually, he will have to face it, conquer it, and wield it again. 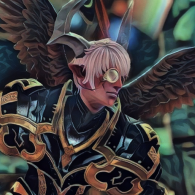