In a Complicated Relationship with Evita "Mother" Nimm

Roman Sionis, a former adversary of Batman [1], recently moved to Los Santos. His alias is inspired by the black mask covering his entire head; underneath is nothing but his skull. He mentioned that years ago, a coworker kicked him into a machine that essentially tore off his face.

Roman's mask features a filtration system, in addition to various buttons that allow him to change his voice at whim. He is capable of many impersonations--the most prominent being Solid Snake [2] and Optimus Prime [3]. The mask also allows him to channel Morgan Freeman [4], our lord and savior.

Roman is villainous and cruel to his enemies, he's not afraid to get his hands dirty. He's often seen spending time with his fellow Gotham City [5] partner-in-crime, Jack Knaves.

Outside of his crime life, he also cares deeply for the people close to him. He's fiercely protective of Erin Cox, his daughter. He also has a complicated romantic relationship with Evita "Mother" Nimm. 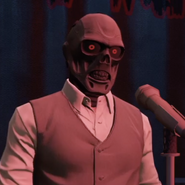 Mask in “A Peek Into NoPixel” trailer

Mask in “A Peek Into NoPixel” trailer #2
Add a photo to this gallery
Retrieved from "https://nopixel.fandom.com/wiki/Roman_%22Black_Mask%22_Sionis?oldid=43857"
Community content is available under CC-BY-SA unless otherwise noted.