Rocko Colombo is the Undersheriff of the Blaine County Sheriff's Office, Badge #350.

Rocko is also famed and acclaimed by the police department for his HR meetings with fellow officers. He proves his "dad-ness" by giving his employee's relationship advice, and how to appropriately act on the job, all while showing off his tennis skills.

Born on December 2nd, 1975, he is tall in height, has an athletic build and rugged looks, with slick back naturally dark brown hair that is currently dyed white, and a neatly kept beard. His body is completely covered in tattoos, though his uniform usually keeps them hidden.[1]

Colombo is a soft-spoken and reserved individual, as he prefers to keep to himself due to his line of work. On the surface, Colombo displays a rather friendly yet apathetic attitude when interacting with others he doesn't know. Although among his co-workers and close friends he shows a lighthearted, caring, and playful side.

Hailing from Northside Queens, New York, Rocko Colombo is the oldest among his siblings of 3 brothers and 5 sisters. Later in life, he moved to Los Santos after having been inducted into a gang known for stealing babies and young children.

Before Colombo became a Detective, he started off his time in Los Santos as a social worker. Coming into the realization of the hardships and struggles in the city, he noticed a lot of citizens had been victims of crimes; from being held hostage to being a casualty. Colombo enjoyed being a social worker, however, he felt that he could do more to help people within the city. After much contemplation and seeing a therapist, he decided to become a cop.

During his years in the force, he ended up taking a six-month break due to high levels of stress. He took up a private security job during his time off, but soon returned to the BCSO, working hard on climbing the ranks, and becoming an official Detective.

Colombo and Mia began dating after he was kidnapped by Reid and forced to take crack. Mia helped with his detox. After a quick romance, and intense dates (fighting sharks) Rocko proposed at the top of Mount Chiliad. The two have been engaged since.

As a result of Mia not coming around the city anymore, Colombo has started saying that he's single and no longer engaged to her.

Rocko Colombo had trouble coming to terms when he found out he had a Biological Son, Reid Dankleaf. Reid only wants love and attention from his father. Reid insists that Colombo knocked up his mother when she was 18, and nine months later, he was born. Desperate to be able to prove this speculation, Reid demanded a sample of Colombo's blood during a bank robbery, saying a DNA test would finally be able to show the truth. Currently, Reid's the only one that really knows if Colombo is actually his father or not.

Though they may banter back and forth regularly, they actually are great friends. They occasionally joke that they used to be married, but this is untrue. This was clarified to be a joke when Mia Mersion questioned the two of them about their actual relationship. While on duty together, they will often ride together; with Colombo repeatedly dissing Angel's driving capability and Angel calling him a boomer.

Colombo has forced Angel to attend multiple PD HR meetings as a result of her relationship with fellow police officer, Kyle Pred.

On April 21st, 2020, Angel assisted Colombo with the quest he gave Kyle Pred to approve his transfer back to the LSPD.

Pred and Colombo are good friends, Pred call's him the "Fun Boss". Pred and Colombo started the trend of using tennis rackets during HR meetings in an attempt to "stop the racket".

Colombo has forced Pred to attend multiple PD HR meetings as a result of his relationship with fellow police officer, Brittany Angel.

When Pred attempted to transfer back to the LSPD on April 7th, 2020, Colombo replied to his request with "denied lmao kyleisDab".

On April 21st, 2020, Colombo approved Pred's transfer request to the LSPD after Pred walked all the way up Mount Chiliad and threw "Smeagol" (Vladimir Raven) off of the side.

Colombo has shown to be caring and supportive towards Forcer, even with his stern personality. She has on multiple occasions referred to him as "BCSO Dad."

Ryan Parker and Colombo have had multiple run-ins with each other, as he's often the one to catch Ryan and Mia doing their "odd jobs". Ryan enjoys winding Colombo up, and making him uncomfortable by calling him "Daddy." On the flip side, Colombo also seems to enjoy harassing Ryan whenever he detains him. Still, it's obvious that both of them care for Mia, and they can respect one another in that regard. 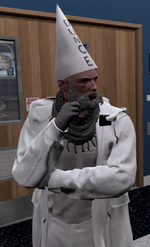 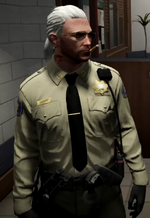 Colombo dressing up as Brittany Angel on "Angel Day" 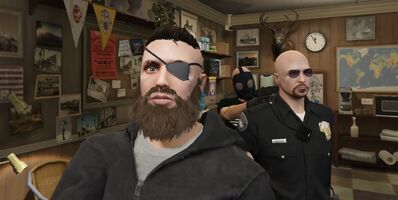 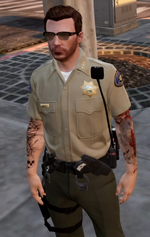 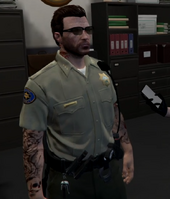 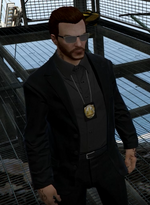 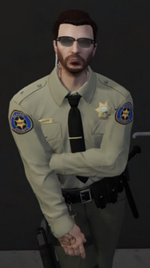 Retrieved from "https://nopixel.fandom.com/wiki/Rocko_Colombo?oldid=74027"
Community content is available under CC-BY-SA unless otherwise noted.