DJ C these NUTS in your mouth

In his new apartment after coming to America from Poland (while leaving his wife who still lives there), he called his friend Pilbis to check on him. His friend was set to inherit a lot of money someday but at the time currently he was stuck in his home after an outbreak of COVID-19. Planning to wing-man Pilbis on how to pick up American women, they decided to meet up the next day. Their chatter got interrupted when Robert heard voices from inside his apartment and thought that he was hearing ghosts. One of the voices that sounded like a little girl told him that they wanted to play a game with him and he started freaking out think that he was losing his mind or being pranked. He eventually figured out that he was probably just hearing his neighbor listening to their television after getting a short complaint from him. Hearing someone knocking on the door his neighbor stopped responding.[1]

Looking for a job, he got employed by Kevin Whipaloo's burger joint serving customers while dispensing his Polish wisdom, which usually consists of a mix of Polish folk tales, trivia, and insults.

Robert opened a truth circle with his fellow co-workers, (Cece, Tee, Kitty, Jeff, Oki and Ken), to explain his involvement with aliens. However, someone broke the truth circle and told someone else who then snitched to Cassie, leading to further questioning of the other colleagues involved in the circle. An internal meeting was held by Cassie, with Shelly, Sheldon, Ken and Rob in a crypt where they discussed:

Discussion became heated when Cassie refused to reveal the employee(s) who snitched and Sheldon saying "Rob doesn't do shit." Feeling irritated and betrayed, Spowylamywanowski decided to resign. He then left and headed back to Burger Shot, where he found out that he had already lost his manager permissions and was denied access to the workplace. Rob met and vented with Freddy Price and Linda Maridan (who didn't believe any of what he did) and later took his bike and rode to Rooster's Rest. On the way there, Ken called him and told that he didn't believe it as well, but perhaps it was just a communication issue. But Rob feeling betrayed as everyone supposedly snitched, stated he would maybe come back to Burger Shot if he had an individual meeting with Cassie.

Losing his position, Robert turned to the homeless life alongside Kyle Brovloski. He begged for money and relied on people for nourishment. Desiring to acquire revenge, he developed a plan: kidnap and torture his former workmates; frame Burger Shot by placing human body parts inside.

Apace with Vagos leader Speedy and others, they abduct and torment Cece, Bike Guy, and Oki. They've also managed to shoot Sheldon Jones and Jeffrey Price. Robert then met with Kyle Pred, an LSPD officer, and discussed about Burger Shot using human remains as one of their ingredients. Pred, who has a burning hatred of the establishment, agreed to look into it in a few days. On the time of the investigation, Bike Guy deposited human chunks (harvested by Brovloski) in the shop and left quickly. Then, Kyle and several other officers arrived at the shop and discovered the remains inside the shop's warmers but after, decided to keep the place running.

He pitched his plan to create a criminal bar called The Alibi to Dean. The Alibi would be intended as a social hub for criminals; host private meetings, purchase lockpicks and take jobs for cash. Rob also expressed interest in returning to Burger Shot as the only General Manager.

After some deliberation, Rob was reinstated as General Manager, with Shelly being the Assistant Manager.

Subsequent to being blamed for being a "super terrorist", Pilbis turned on Robert for not protecting him. He then abducted Robert, shot him and left him for dead consumed by fire in a vehicle. Members of the The Guild later revived Spowylamywanowski as well as clothing him and inserting in a new mask made of fingle sauce, shelly's hair and metal.

The Four Tee incident and the formation of The Nut Boys

After finding out that Pilbis, his best friend, and Four Tee were very close, Robert wondered what kind of secrets 4T might've known about Pilbis, and was mostly curious if Pilbis had been talking bad behind his back.

After learning about 4T's friends list, Robert hired a hypnotist to make Robert higher on the list than Pilbus.

This backfires, as Abdul claimed, "You don't fuck with Four Tee."

At Burger Shot, Abdul gave him a quick run down on 4T telling Robert that he made a deal with the devil and one day the devil will come to collect.

Scared, he turned to his mentor Leslie, who at first says 4T is Rob's problem, but eventually decided to help him.

They decide on a fishing trip, during which Robert played polish Uno and drew a reverse card, ending up with a boat in land and a car at sea.

Soon, they found 4T hiding in the trunk, and once she came out she told Pilbis that Robert kidnapped her, leading to bad blood between them.

During the fishing trip, they made an oath to protect each other, always be honest, and always be there for each other. As well as stop Mark White. And thus, The Nut Boys were born.

Paranormal Investigation with the Nut Busters

Formed the Nut Busters on the 13th of March, to deal with paranormal activity within Los Santos.

Other characters portrayed by Roflgator in the past. 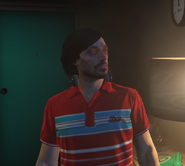 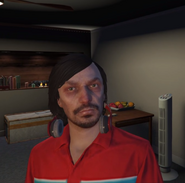 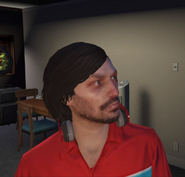 Working at the burger bar

Working with Barry Briddle at the burger shot