Reid Dankleaf is a character role-played by 0Reed.

Reid Dankleaf is Sergeant At Arms of the Lost MC. He has multiple scars on his face, inflicted after being shoved face-first into rotating helicopter blades by Vladimir Raven.

In the Old Server, Reid held title of both Chief of Police, and Mayor.

In the New Server, Reid is a "shitlord" criminal. He has claimed that he is the biological son of both BCSO Sheriff Travis Tribble, and BCSO Undersheriff Rocko Colombo.

He has no morals or ethics, and feels no guilt when hurting people. He has worked hard to break his addiction to meth, but it will always be his weakness.

Currently spending most of his time mentoring Ryan Parker.

Reid Dankleaf was holds the rank of Sergeant at Arms in the Lost MC. 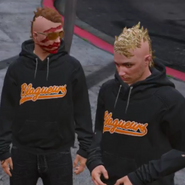 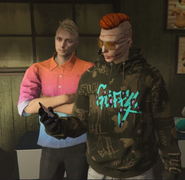 Reid winter outfit
Add a photo to this gallery
Retrieved from "https://nopixel.fandom.com/wiki/Reid_Dankleaf?oldid=39942"
Community content is available under CC-BY-SA unless otherwise noted.