Reggie was the Road Captain of the Lost MC, and the founding President of the MC before Rudi Rinsen took over.

Reggie was the President of the Lost, until he stepped down when he had to leave the city for a time, and Rudi then took over. When Reggie came back, he was appointed as the Road Captain for the MC.

Reggie was shot by Alabaster Slim (with Eugene Zuckerberg and Lang Buddha) in a gunfight during the war between the Lost MC and Cop Killa Records, and passed away from his wounds in Pillbox Medical, on July 20, 2019.

A funeral was held on September 14, 2019 for him, Victor Mason and Cooch Cassidy, who also died during the war.

Last Will and Testament

Firstly, I leave my bike to the The LOST MC. To be used or displayed however they see fit.

To Gary, I leave my original wrench. Leave no bone unbroken mate.

To Reed, I leave my helmet, in the hopes that you don't get any more brain damage from crashing your bike.

To Ryan, I leave my very bloodied map of Los Santos. Don't lose yourself because of people you hate, else you will end up like me and no one wants that. Take care of Reed.

To my daughter, Mia, I leave all my savings. To be given on her 18th birthday, to pay for the education I never had. Know that you were named after a pretty cool chick.

To Rudi, I leave his prospect patch. You've come so far and have done more than I ever could have dreamed. I'm so proud of you man.

Last Will and Testament 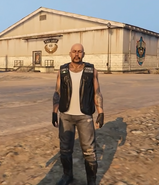