View source
watch 02:05
Wiki Targeted (Games)
Do you like this video?
Play Sound

Reggie Might is a Criminal Defense Attorney who is the Owner-Partner of Might & Right Law Firm in Los Santos. Lawyer, Meggie Right and associates work alongside Reggie in their plight to fight for justice for their clients and help to set precedence that not only expose loopholes within the justice system but also to mitigate the injustices that can cripple their clients rights due to such inadequacies within the justice system.

Reggie Might is a cut-throat attorney who came from a criminal background and has turned his life around to seek justice for the citizens of Los Santos. As a criminal, Reggie learned that the laws were often misunderstood or misrepresented with little regard for criminals and their civil rights.

Reggie is notorious for being cocky, confident and very intimidating. His courtroom approach is aggressive, flamboyant and articulated and his attention to detail, unprecedented. Being a sociopath, Reggie uses manipulation and calculated maneuvers to under-hand not only his opposition in the courtroom but anyone in his path of justice and as one of the most sought-after lawyers in Los Santos, Reggie and his law firm are extremely busy.

Reggie also has a very dark and sinister side which is yet to be exposed. He likes to toy with people's emotions and uses his power of persuasion to gain their trust. Many of them are just pawns, waiting in the wings for when Reggie wants to manipulate them for his own purposes.

Reggie has a long and well-established relationship with the Vagos, which the police are well aware of, especially when they scream out "Reggieeeeee!" in the cells.

Also a member of Law Gang, Ash thinks of Reggie as a brother and trusts in his ability to help her whenever she is in trouble with the law. Reggie also helped get the vagos tag removed from her MDW profile, when it was put there by Randy Wrangler

One of Reggie's latest clients 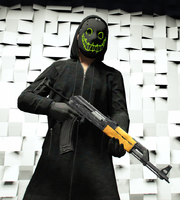 Reggie started going down a dark path after he meets with a woman by the name of Amanda Corrina, who had called Reggie and asked him to meet with her to discuss her boyfriends' case, who was a lifer in prison. Her boyfriend was in prison for multiple murders and acts against women. Reggie has limits on who he represents and refused to take the case. Amanda then flipped and demanded 50k from Reggie so she could try and break her boyfriend out of prison. Reggie refused, so Amanda and her boyfriends' brother, tortured him and left him to die.

Reggie was found alive and was in ICU for a number of days. His face was permanently scarred, which left him unwilling to show his face. Reggie felt his scars represented weakness, especially since the attack itself made him feel vulnerable and powerless. No one makes Reggie feel this way and gets away with it. Reggie decided to wear a replica of the mask that was worn by his attackers, except his one is green whereas, Amanda's was pink. He then went on the hunt to "kill" Amanda and had spoken to Clarence Williams and Lily Pond from the Los Santos Police Department about his intentions. He understood the consequences of his actions, but revenge was what he needed to get back the self-esteem and confidence that was shattered by Amanda.

Shortly after, Reggie began a movement similar to The Chaos, Which is also a terrorist organization and just as open and vocal about their cause. Exposing the corruption within the DOJ and Police Department and openly chanting "embrace the chaos" on twitter and tagging the MRPD and the Courthouse with this same message. Reggie's dark path was evolving more and more. It turns out that the "chaos" movement became somewhat of a smoke screen for his "alleged" murder of Amanda Corrina. It seemed to throw the PD off the murder investigation somewhat and and kept them distracted. The movement involved wearing the mask that Amanda wore when she attempted to kill Reggie. Reggie called upon civilians, criminals and various DOJ members to join his movement, Including Paige Green ex-District Attorney and his Law firm partner, Meggie Right.

Reggie also spoke with a number of police officers and a few judges, using them as pawns in his scheme of deception. Gaining knowledge and planting seeds of information each time. Everything Reggie does is calculated and he is always steps ahead of his opponents. As the Police Department's most hated lawyer, it was not surprising that Reggie became a hot target for the Major Crimes Division, in regards to the alleged murder that he was suspected of. Reggie hand-picked officers, knowing exactly how to get information from them, when to give them parts of information that "he" wanted to give them. Time will show just how important these actions are, when pieces of the murder investigation, are all pieced together and how this impacts the final outcome.

Vagos, War and the end of the Murder Investigation

Coming to the end of the 30 days for Reggie to be charged with Amanda's murder, Reggie was losing more and more faith in the DOJ and the Police Department, with outlandish rulings from judges, the police avoiding him for cell representations and pressing unfair charges on his clients. He became more drawn towards the life of crime and his relationship with the Vagos was intensifying, especially after Matt Rhodes tagged him as Vagos for having yellow shoe laces. The next day he dressed all in yellow and vowed to keep taunting the police by dressing more like the Vagos.

Whilst boosting cars with Pepe Ramos from the Vagos, Mando Thompson from the ballas crashed into Reggie's car. After a few words were exchanged, Mando decided to hold Reggie and Pepe up, rob them and then kill them. Something you do not do to Reggie, is attack him. This became a personal vendetta for him and Reggie unleashed more of his dark alter-ego to seek vengeance on his attacker and/or anyone else in his way. Reggie had once again entered into another stage of his evolvement, from law abiding Attorney, to full blown criminal. He joined the Vagos on their war against the Ballas and vowed to kill Mando for what he had done to him.

During one of the gun fights between the two gangs, Reggie surrendered to the police and claimed "stand your ground" defense. This went to bench trial as the police didn't believe Reggie was simply defending himself and charged him with gang related shooting, which Reggie pleaded not guilty to. During the bench trial, Judge Allison Thomas ruled against Reggie, stating that he should have dialed 911 and retreated, instead of retaliating and shooting back at the Ballas. Due to Thomas's interpretation of stand your ground and gang related shooting laws, she had found Reggie guilty. He was then charged and sent to prison. Shortly after Reggie got out of prison, he received a phone call from Alan Crane, a newly appointed Attorney. Alan told Reggie that he had passed the ruling by chief Justice Coyote Russell, who said he would approve an appeal based on the information Alan Crane had given him. At this point, Reggie was already fuming. He knew the justice system would let him down and it seems this was just another nail in the coffin for him to turn further towards crime. Reggie said at this point that he wouldn't appeal the charge and if there was a bar review against him because of this, he would just let him have his bar license.

Something else was also brewing in the wings for Reggie. Weeks after the murder investigation started against Reggie, the Major Crimes Division had hit a dead end. However, coming up to the eve of the 30 days limit for Reggie to be charged with the murder of Amanda Corrina, Kareem Lyon from M.C.D decided not to let Reggie off so easily and re-opened the investigation.

Lyon painstakingly pieced all the evidence together that Lily Pond and Daisy Dukakis had collected, along with linking casings from the M-70 used for the murder, to any casings found from Vagos who were charged previously. He hoped this would give enough reasonable suspicion for a search warrant to raid Reggie's warehouse with the added bonus of nailing the Vagos. He used the M.C.D's previous investigations on Reggie and all the evidence linking him to the murder, to issue a warrant for his arrest. Meanwhile, Reggie was already wanted for gang related shootings again. This time, he was fully involved in the shooting and was apprehended by police but not cuffed at the time. He managed to escape at Pillbox Medical Center and evaded the police for 2 days.

On the final day for Reggie to be charged with Amanda's murder, Reggie made sure to clear his warehouse, sign over Might & Right Law Firm to Arthur MacNee from his firm and prepared himself for his inevitable arrest. Later that day Jackie Snow arrested Reggie and took him in for questioning. After almost 3 hours in the interrogation room and without Reggie being interviewed, M.C.D realized they couldn't press the murder charge as they were outside of the statue of limitations. The District Attorney Jacob Slate advised the police that they didn't have enough reasonable suspicion to issue a raid warrant either. Reggie served a small amount of time for the gang related charges from the previous warrant but was cleared of the murder charge and released.

On the 28th July 2021, Reggie was summoned to the court house by judge Allison Thomas. She issued him with a suspension of his bar license due to his recent felony charges. This came after he was refused entry into MRPD to represent a client and he was told this was an order from high command, prompting Reggie to file appeals for his felony charges. Shortly after was when was summoned to the court house. Reggie told Thomas that he had appeals in for both felony charges however, Thomas said he was "guilty until proven innocent" and he will stay suspended until he is cleared of those felonies. This was the final straw for Reggie. He slammed his bar card on the judges desk and told her to keep it and walked away. If this was how the justice department wanted to treat him, Reggie wanted no part in it.

He was tired of fighting the DOJ and the Police Department for peoples rights, when no one else would listen, laws were being misinterpreted or overlooked and too many corrupt cops and judges were getting away with breaking rules, regulations and abiding by the law when it suited them. Sure Reggie had gone on the deep end a little with some of his unorthodox methods but he knew getting through to people by normal means, wasn't working and he had to think outside the box to get their attention. Although his suspension had been coming for sometime, Reggie knew to his very last day as lawyer in Los Santos, that he had put up a great fight and done all that he could have done for peoples rights. He was done trying.

"stay away from the barrio" 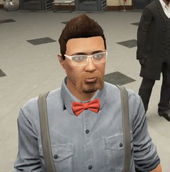