Raphael Kristof is a character role-played by CrimsonSwordsman.

Raphael was born in a secret village full of religious cultists that go by the name "The Gods of The Myriad". His mother and father were co-leaders to the group and left Raphael's grooming to his aunt (Elena Kristof). Elena Kristof wanted Raphael to be the perfect individual to take over "The Gods of The Myriad" and would teach him all the beliefs that he holds dear to this day.

These beliefs would range from Sacrificing humans, animals and objects of importance to the gods.

Consuming humans & animals for nourishment, so that way the dark gods power could flow through him and equip him with the evil god "AGA-HATHS" supreme wisdom/powers.

Teaching him the infinite wisdom of "The Gods of The Myriad", that are taught to every disciple from childhood to adulthood and so forth.

Lastly to believe in oneself, even if the whole world believes otherwise.

Since Raphael was always with this aunt and other cult members, he never truly knew his parents. They both always seemed so busy and when he tried to talk to them, they would order guards to haul him away from them. This made Raphael develop a loner attitude and would lead to him acting this way till adulthood. He didn't really mind being away from this parents cause he had his aunt (Elena Kristof), who he loved and admired since he first met her. She was everything Raphael strived to become, he wanted to be with her until he died and he then would resurrect himself as a new "God of The Myriad".

As he grew older however, his aunt began to teach him things he never knew before and as he learned all these horrific new things. It taught him to look at the world in a new world order and would haunt him till this day, Later on as he was about to reach the age of 18 the cult began his awakening ceremony to become the next leader of "The Gods of The Myriad". During the ceremony Raphael was able to pass the 10 trials of "The Gods of The Myriad" God Sigihan created to new leaders. The trials consisted of paths that lead to lessons that would make a good leader, a great leader. His parents then welcomed him into open arms and his aunt (Elena Kristof) gave him the necklace of the myriad. A ancient myriad jewel that harness's the energy of the life force surrounding you and opens you to new levels of understanding.

With Raphael now the newly appointed leader of "The Gods of The Myriad", he yearned for more knowledge and understanding of human cultures. Raphael knew he wouldn't be a great leader being held up in a secret society, so he left his parents and aunt in charge to take care of everyone in the village and left to travel the outside world. Raphael went many places and he would watch human and animal behavior alike to become more understanding of basic world ways. As he was traveling around the world he started to understand the world and the world understood him. By the time Raphael was thinking of returning home to the secret society village "The Gods of Myriad". He started having nightmares and visions of a place he'd never seen or heard of before. He couldn't understand what he was seeing, so he sent a letter to his aunt (Elena Kristof.) She told Raphael that these visions were the gods way of showing him his destiny and his path of unity. Raphael then looked at a few maps and found what he'd been look for... a place called Los Santos. He could feel the energy emitting from his Myriad jewel and knew something was calling him to Los Santos.

Raphael once created his own off-shoot of the HOA called the UNA-HOA, it is currently unknown if this group is still active.

Siz Fulker once considered Raphael an extension of the HOA during their brief Crimson Boomer arc, although prior to the aforementioned arc Raphael was considered an ambiguous enemy whose prior interactions either angered or downright confused the HOA. Later the HOA hired Raphael to do investigations on people and find information, although this was dropped due to a lack of need.

Raphael publicly proclaimed himself as the leader of the Crimson Boomers after Huckleberry “Huck” Guthrie, Julio Thomas, and Frederick “Fred” Bodini psychologically manipulated him into thinking that he is the leader. The Los Santos Police Department and the Department of Justice, however, do not believe that he is the actual leader and just think that he is insane.

Since his release from prison Raphael began to more regularly interact with the HOA, thus further exposing them to the more humorous aspects of his persona that they had seen in prison. The sheer outlandishness of his comments, coupled with an innate ability to teleport randomly while driving, garnered quite a positive reputation among the HOA. The group went as far as to humorously proclaim him to be a "god" that they worshiped (with Siz even including a picture of Raphael in the Mirror Park Tavern.) However, his high standing in the group would be ended by December of 2020 after he willingly snitched on the HOA and was then later shown the HOA's secret warehouse by Stanley Wilkinson. This prompted Siz to privately make it clear to the other members of the HOA that Raphael was not to be trusted (although despite this there is no real animosity between them and he still regularly hangs around the HOA.)

Although not considered a member of the HOA, when prompted about his status in the group Siz stated that he was a "background character".

On May 4th, 2020 Raphael suicide bombed a police truck outside MRPD with a stick of C4 he purchased from Siz. In the process he managed to also blow up Brian Knight and Jenn Bordeaux.

He was held in Bolingbroke Penitentiary for a record 97 years in prison and was released on August 17th, 2020.

The Gods of The Myriad

Long ago years away from years in the north of poles of Nunavut, a small group of cultists started a group called "The Myriad". The Myriad would slowly grow over time, but hiccups would start up when it came to leadership. After a few years of this... 1 individual would show true power and true enmity. A god named Sigihan The Wise, a man who could do literally anything and knew true knowledge. With this new force of power, each generation would thrive and then the cult learned of the many 10,000 Gods of The Myriad. New Rules, New Customs & Abilities you would never thought possible. 10,000 years later, The current leader of "The Gods of The Myriad" Raphael Kristof would learn of all knowledge of this past. Scrolls of the gods, Books of the past and Ancient enhancements, The Gods of The Myriad are an ever growing pandemic of truths and justice.

During his stay in Bolingbroke Penitentiary, he milked the Department of Correction guards and fellow prisoners in the prison. He calls female "specimen" milkies and male "specimen" milkers. His first ever "milkie" was a guard named Lisa Adkins, though she claimed she was never milked by him and attempted to sue Raphael for defamation.

After his 97-year ordeal in prison, he made his milking into a successful business. He had investors throughout the city, ranging from various policemen, to criminals, to businessmen. He had an active research and development section where he developed new technologies and ways to milk people. Raphael claimed that he made about $8,000 per day just by selling his milk.

On 9/21/20 CrimsonSwordsman was commanded by server administration to halt any further "milking" RP and retconned all prior situations regarding the business (including an ongoing court case), which in RP was explained as the government sending a "cease and desist" to Raphael regarding the business.

In 3.0, Raphael revived his milk business and shifted towards a more safe for work (if not still odd) product line. He now sells various dairy milk products at Dean World and the Andi Jones Farmers Market. 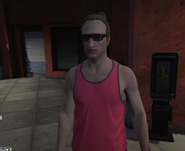 Raphael feelin' fresh after a vacation. 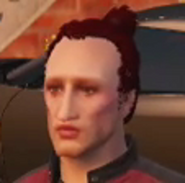 A closeup of Raph
Add a photo to this gallery
Retrieved from "https://nopixel.fandom.com/wiki/Raphael_Kristof?oldid=127311"
Community content is available under CC-BY-SA unless otherwise noted.