Randy "The Rascal" Wrangler is a character role-played by PENTA.

Randy Wrangler is a Captain for the Blaine County Sheriff's Office, Badge #317.

Randy Wrangler was originally a police officer working for the Oklahoma City Police Department, where he specialized in undercover prostitution stings. He also mainly broke up ham fights while in Oklahoma City.

Randy Wrangler is a loose cannon as skilled in investigative work as he is easily distracted. Wrangler's determination and unpredictability simultaneously causes headaches for his fellow police officers and places large targets on his back as he cracks down on the criminals of Los Santos. Wrangler is borderline fearless in who he goes after for criminal activity ranging from high ranking members of major street gangs to even the mayor of Los Santos. Wrangler's reputation for aggressive policing and compulsive need to follow every lead no matter how small makes his very presence a threat to criminals who know him, well aware that Wrangler will levy whatever charges he believes he can make stick and that one slip up in front of him may end in him getting a search warrant signed for a raid on their home and everything inside.

When dealing with difficult suspects that he knows are lying Wrangler likes playing his cards close to his chest, often staying quiet about key pieces of evidence while trying to work them over in an interrogation room in hopes of being able to use it to catch them in damning lies. His other favored tactic is cutting deals for guilty pleas in order to drop bigger charges and help suspects out, even if he knows he could likely charge them for so much more. However he will not hesitate to come down with the full force of what he believes he can prove should they be adamant in denying him. Wrangler dislikes dealing with lawyers when he does this, believing them to simply muddy the waters with arguments of irrelevant points.

Wrangler displays behavior strongly suggesting he is a closeted homosexual, but he vehemently denies this when asked and is a subject that will quickly agitate him.

Wrangler bears a very hard stance against corruption within his department and is extremely quick to anger if he believes that it is taking place.

Currently a work in progress/passion project

Following his promotion to Captain within the BCSO Wrangler has begun to ease away from the major long term investigations. Holding a special place of hatred in his heart for the near non-stop string of bank robberies in Los Santos and the police that respond to them Wrangler has declared them all "bank sluts" and will not go to a bank robbery unless necessary or something out of the ordinary is in play.

Wrangler at present favors returning to his roots, hitting the streets, and seeing where the winds of Los Santos take him with 911 calls. Doing so has left him with no shortage of smaller investigative puzzles to solve leading to long interrogations, catching criminals in lies, and clashes with lawyers like before. This has also lead Wrangler to have numerous raid warrants signed with often outstanding payouts such as catching Riley Carter with absurd amounts of marked bills that, unbeknownst to him, was nearly everything for the Bondi Boys MC and a massive loss the news of which left Irwin Dundee not only stunned but amplified his personal vendetta against Wrangler. 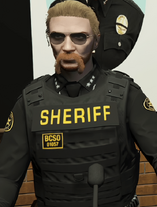 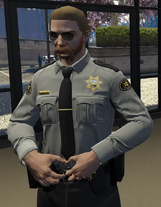 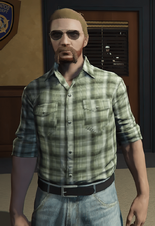 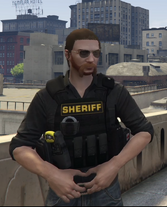 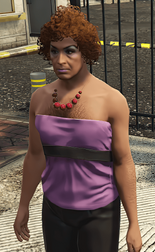 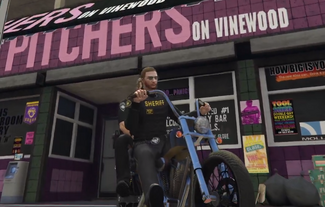 Wrangler and Toretti taking a load off at Pitchers