In a relationship with Adrienne West

Raja Bahadur is a character role-played by Fairlight_Excalibur.

Raja Bahadur is a jack of all trades. He has his fingers in almost everything, knows almost everyone and does most things for the thrill more than the actual monetary gain. Raja used to be a fixer, and was able to procure almost all products and information necessary. He is the current owner of QuickFix and has a more specialized assortment of products, however still gathering info when necessary and pulling strings to get products he doesn't sell. He is very careful and calculated and as a result has yet to be caught committing a single felony by the law enforcement.

Wanting to learn more about the cars of the city and earn more money, Raja applied for a job at Stroke Masters Repair Garage in order to become a mechanic. Due to the company Raja kept at the time, the job application was declined. This turned out to be a good thing for Raja, as Stroke Masters went out of business just a few weeks later.

With the job at Stroke Masters not working out, Raja then approached Rudi Rinsen to apply for work at QuickFix, where he was hired and in the span of a few weeks went from a green mechanic to running the day-to-day business. Raja was frequently the only mechanic available in the evenings and made many of his early connections by chatting with everyone who brought their cars in. He also began buying and selling other products on the side while fixing cars, including guns, drugs, electronics, spare parts, and more. This slowly led to Raja becoming a sort of criminal pawn shop, using his work as a mechanic as cover while dealing in all manner of illegal items.

As the responsibilities of Raja increased at the repair shop, so did the Lost MC’s trust of him. Raja was brought in to help with their backroom business of selling guns, which primarily came from Nino Chavez. This lasted for about two month until Nino moved out of the gun business and the Lost MC no longer had a source for firearms.

Raja would later get back into the gun trade, taking it upon himself to supply guns to the city. He arranged to have several shipments of weapon parts smuggled into QuickFix disguised as auto parts. He then assembled the weapons in the back room of his shop. This grew his business greatly, and allowed for him to become a major player in the gun market. Over time, he brought in David "D.C." Chris, Summer Mersion, Karlias Drex, and Zeke Vernone to help with the smuggling and assembly of firearms.

Roman "Black Mask" Sionis was looking for someone to buy a house for a weed growing operation and reached out to Raja who ended up buying a house, which was rather successful for a time as weed pushers got hired. Eventually the weed market crashed, but Raja kept on growing weed in the hopes that the market would change. When Mask disappeared, Penny Evans was hired for growing and distributing the weed.

Raja was approached by Dominique Woods on the QuickFix lot during an otherwise standard repair job, offering to sell Raja some Cocaine. Raja, not knowing who the man was, reached out to his contacts to figure out who the man was, only getting one positive response from Gomer Colton. The following day, Dom reached out to Raja once more and offered a direct connection to the cocaine market, forming a new business venture that continues to this day.

The Lost MC eventually sold QuickFix to Raja for $300,000, draining his personal finances. The deal meant that the Lost MC wouldn't be working there anymore, and they would take the company funds with them effectively making Raja have to start over rebuilding the business from scratch. His first hire would be David "D.C." Chris, other notable hires at the time included Manny McDaniels, Annabelle Higgins, Summer Mersion, and Johnny Turner.

For several months, Raja was in a relationship with Detective Jenny Hall. According to his own musings, the relationship was ultimately doomed to fail, primarily due to their inability to share knowledge of their daily lives from across the fence of the law and eventually the two separated amicably.

Recently he has been talking to former District Attorney turned Lawyer Adrienne West whom he visited and supported in Parsons Rehabilitation Center after the Arthur/Bovice incident. A romantic relationship between them has been made "Official" as of mid-December 2019.

The split of the Bondi Boys MC originally led to some of his employees being targeted, however this has since been dealt with due to the departure of Arthur Hammond from the city and a conversation with Nino Chavez. 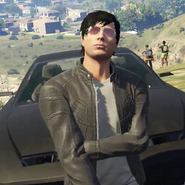 Raja before the clothing menu update

Raja after the clothing menu update