Rafas El-Rahman is a character role-played by Kyle.

On March 7, 2020, Rafas El-Rahman arrived in Los Santos looking to reunite with his twin brother, Ramee El-Rahman, as well as his other siblings, Reema and Remee. 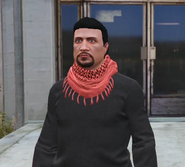