Quimbley "Q" Hayabusa is a former "hoodrat" turned business woman who likes to get her hands dirty from time to time. She moved to Los Santos following years of trauma she has been trying to put behind her. Despite the horrors Q has encountered, she continues to push herself forward and strives for greatness.

Q has pursued her passions in Los Santos, having since become a popular Wu Chang Records artist and the owner of Swallow adult store. Her criminal activities have led her to becoming a Street Team associate, partaking in gang wars, robberies, and supporting their weapons and drug trafficking operations.

Q is not motivated by money but friendship and the people she surrounds herself with, as she strongly values her relationships. Though she is a very friendly person to just about everyone she meets, she trusts very few people outside of her close circle.

Q has a chaotic side to her that she feeds off of when she’s around other chaotic people. She's the type to observe the things around her to make a judgment call before jumping head first into a situation. She seems innocent at times, but she’s calculating.

You can find Q's music on SoundCloud, Spotify and YouTube Music 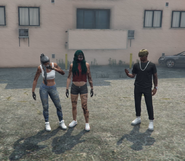 Q with Arya Shah and Stone Malone in Little Seoul 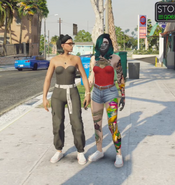 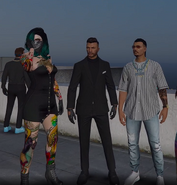 Q with Pigeon before doing her first weed drop-off for the Aztecas
Aug 11, 2022
Community content is available under CC-BY-SA unless otherwise noted.
Advertisement