Princess Rin Reyes is a half Japanese and Filipino girl who was raised to believe she must be successful at everything she does. As an only child under strict watch from her parents, she was told that she must live her life to be better than everyone else. However, due to her lack of natural talents, others mocked her name ‘princess’ because everything was ‘handed’ to her. In reality this just added to the verbal abuse she endured by her parents and constantly reminded her of how much of a failure she was in their eyes. Her parents eventually divorced due to constantly fighting over whose parenting style was better and who would keep Rin in their household (Neither wanted to support her). This crushed her motivation to keep trying and she eventually ended up getting a 'regular' accountant job. Because she chose to keep her 'average' job, her parents continued to berate her and eventually told her that neither of them would support her if she didn't improve her career. With the complete loss of support from her family, Rin snapped and decided that she no longer wanted to live near them and left without saying a word.

The one thing that Rin hates the most is her first name Princess. She was constantly picked on by other children as she grew up because she could never meet the high standards set by her extremely successful parents. Every family or social event Rin would attend, her parents would boast about how great she was, even if they thought she was lacking in all her skills. Due to the fact that she wasn’t as talented as her parents made her out to be, she was always made fun of, or others would point out her flaws. Although she was constantly teased by other children, she would pretend as if nothing happened and act as if she was still happy. Because of her past trauma, she constantly tries to remind herself that she doesn’t have to be good at everything.

Princess Rin Reyes, is an easy-going and friendly girl who is normally seen around UwU Café and Pixel Perfect. Rin's original signature look was comprised of a bucket hat and backpack which she picked to match with her ex-boyfriend Javier Diaz. However she has recently changed up her wardrobe, bringing in lots of different looks that she often switches between throughout the day. Rin is known as a sweet person who would do anything to help her friends and those around her. She often worries about being helpful to her friends since being a burden is one of her biggest fears.

Rin watching the sunset at the Jetty taken by Taylor Briggs 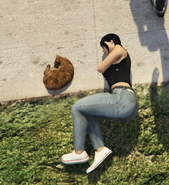 Rin laying with a kitty outside UwU Café

Rin and Lucas Spade dancing outside the OOC gas station

Rin with DNF and some friends 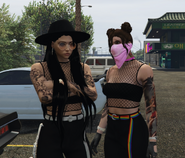 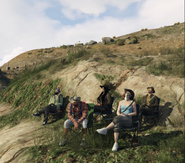 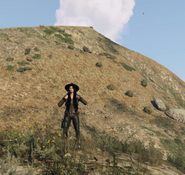 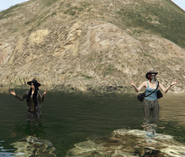 Rin and Ash Ketchup in the river while on an Hike.

Rin at the pride event

Rin with Save Our Souls 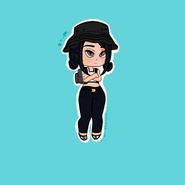