Posy Florian is a character role-played by LetterJaye.

Posy Florian, commonly known as Posy is a usually joyful and enthusiastic young woman who likes to help whoever she can and make new friends. She has several quirks about her including a childlike sense of wonder and distinct speech pattern. She likes to, as she put it, "play dress-up," meaning she very often changes her dress and wig. The main constant being her makeup.

She used to shave her hair to better put on her wigs, but after not shaving it since arriving in the city, it has been shown to be a dark ginger/brown in colour.

Her iconic makeup was one of her distinguishing features, one of the many result of her upbringing. Because of this, she was often mistaken for a clown or mime, which she took as a great insult. Recently though, she has been seen without her makeup more often.

Posy is an enigmatic figure. Not much is known about her and even less about her life before ending up in the city. The few things known about her is very cryptic. She grew up isolated from the world at large alone with her mother in the "forest".

Her mother sheltered her heavily since an early age, with her being Posy's only source of social interaction. It seems that she still taught Posy about the outside world, but clearly a skewed version of it and only what she wants her to know. She also doted Posy a lot, playing many different games with her. One of there is "cops and robbers", though Posy said that they were always the robbers and the cops are very good.

One day, when her mother went out in one of her usual trips, she didn't come back. Worried, Posy left her home for the first time and into the outside world. She somehow ended up in Los Santos while looking for her mother.

It seems that due to her mother's influence, Posy became a really trusting person. She hardly says no to anyone unless it goes against something her mother said. Because of this, she often goes with whatever people say. Though it seems that due to recent events, this has start to change slightly.

Despite this innocence, Posy is not stupid. She often lacks many general and common knowledge but has shown herself to be quite smart. This still does not help her from the odd burst of stupidity.

She is still naturally inquisitive and helpful to a fault, many times to her own detriment. She would go to great lengths for any of her friends in need, with or sometimes without their approval.

Posy's true age and date of birth is a mystery to everyone, including herself. When she came to the city, she made up an official birth date for her ID. She has confessed that she is probably quite a bit younger than her ID suggest, estimating her age in the early 20's.

She also belives that her growing up was one of, if not the reason for her mother's disappearance. She made Posy help her in her illegal activities so she thinks that her mother might not need her anymore when she was all grown up.

Posy doesn't have the best experience with vehicles, especially her own. She has claimed multiple times that they are in some way cursed. The first major incident of this was when her BMX bicycle warned her of low fuel. Confused, she went to a gas station to see what would happen. After being refuelled, the bike seemed to take on a mind of it's own. Moving on its own whenever anyone sat on it and levitating in mid air to name a few odd behaviors.

Wanting to get rid of her possessed bike, she saved up money working at Burger Shot to afford a car to replace her bike. Unfortunately, the trouble didn't end with the bike. When she went to PDM to purchase a car, she chose the Asbo, a small compact car which she later named Maxwell. After signing a loan to buy the car, the dealer told her and the lenders that their garage was having some issues and the car cannot be taken out at that time.

The problems keep on going however. After first repainting the car, she decided to change the rims. For reasons unknown to her, other customers, or the employees at Benny's, changing the colours of the rims makes the car become all black with yellow interiors. Deciding it was too much of a hassle, she kept her old rims. Now posy is afraid that the being that possessed her bike now possesses her new car.

Posy's relationship with Burger Shot has been tense for months ever since she discovered about many of the darker dealings and activities of many of the employees and upper management. At first, she did nothing, as quitting would put suspicion on her. For those months she still worked, enjoying the company of her friends. For months she continues to work there, but increasingly also doing her other jobs such as at the casino and metal detecting.

This all went ahead when one of her close friends, Lucas Spade, testified against some of the Burger Shot employees, including Shelly Smith and Pedro Frankfor for attacking one of his friends. In retaliation, they shot him and threw him in a vat of boiling oil. It took quite a while, but he was eventually found by Lexus Lane and was put into intensive care, where he would stay for several days.

After receiving the news, Posy took off her makeup and wig, something she had done in the past when she is under great stress and wants to get away from it all. It was an advice she got from her mother, it’s easier to hide by taking makeup off than putting it on. She also changed her outfit from her usual dress and leggings to a more nondescript jacket and jeans. She spent quite a while accompanying Lucas in the ICU and helping him after he was discharged.

After learning of what happened to Lucas and more importantly who did it, Posy made the immediate decision to quit Burger Shot then and there. Her request was originally ignored and downplayed by Scruffy and Shelly, thinking that it was just a phase that she’ll move past. After repeated insistence on her side to Scruffy to remove her from the employment list, he finally did.

Posy learned about the Federal Investigative Bureau through Bench Guy whilst at his usual spot in front of Burger Shot. She had met him before, when his connections to the FIB was not known. Once she learned of his involvement in the FIB, and discovered the FIB building when delivering food to him with Steven Hayes and Shirley Lemons, she began pestering Bench Guy for a job. He eventually aquiested, after a couple of days, and made her a clerk in charge of the front desk.

She eventually got the position of head clerk of the building and personal assistant to agent Lauren Forcer. She also gained the ability to hire people herself including Glenn Trigger as her assistant and Booba as a security guard. Now established in the FIB, she has informed the police all she knows about the happenings in Burger Shot, including all of the illegal activities she knows of that happen within it.

One day she was issued a police baton by Bench Guy to help her in her job of making sure no one passed the turnstiles at the FIB building. Due to the vague nature of the FIB at the time, and her position therein, when she was spotted using it on a local in her front lawn by her neighbor Trooper Olivia Copper, she filed a warrant for her arrest with charges of criminal possession of a government issued baton and assault with a deadly weapon. Once she saw the warrant, she turned herself in, pleaded not guilty, and went to prison for 22 months and befriended a lifer by the name of Elwood.

Posy seems to have a knack for getting into dangerous situations. Sometimes due to her own actions, but often times out of sheer coincidence. Some of her major injuries includes:

"Do you have your strap on?"

(This is only a small selection of Posy's outfits) 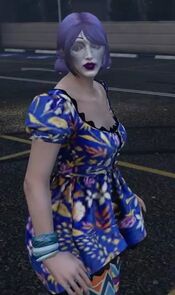 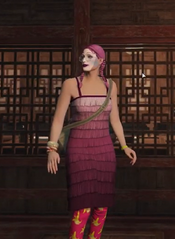 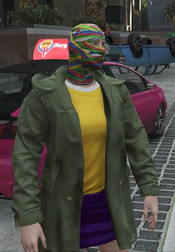 After leaving the ICU 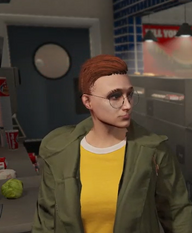 Without her wig and makeup 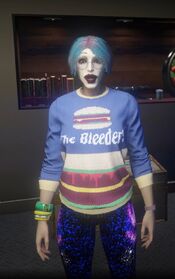 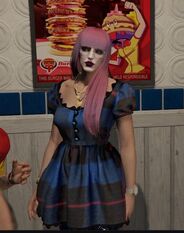 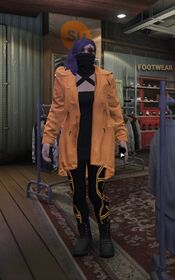 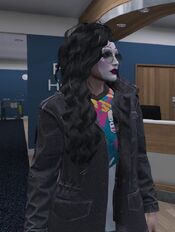 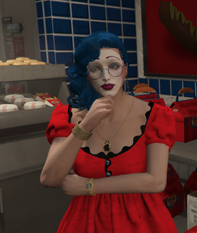 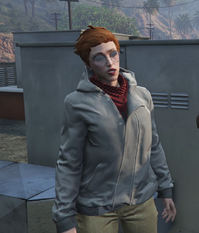 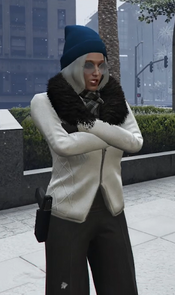 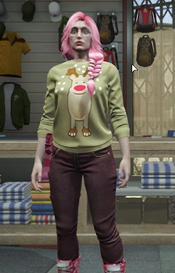 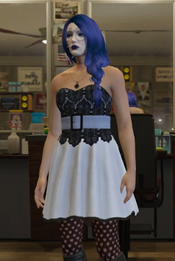 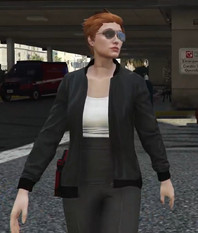 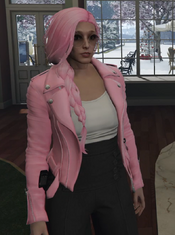 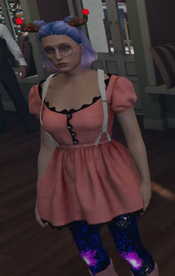 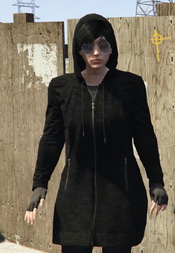 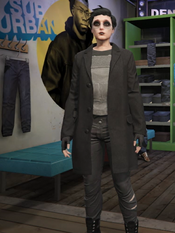 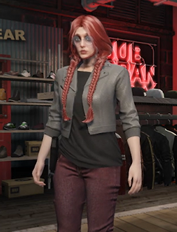 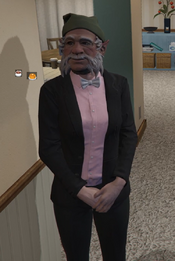 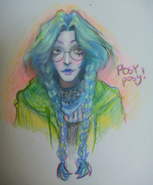 Doodle by Avir on Discord 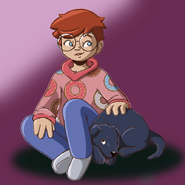 Posy and wigwag by Shastadon on Discord 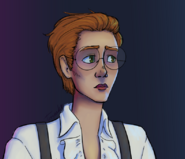 Posy in FIB outfit by Danno on Discord

Posy and Dahlia Fey "Helmet Gang" by Avir on Discord

Derpy Wigwag by Danno on Discord