Pixie Plum is a character role-played by Madmoiselle.

Pixie Plum is a psychologist, and physical therapist and also a member of the Board of Directors at Pillbox Medical Center. She also works at Parsons Rehabilitation Center, where she helps patients with their therapy. She has recently been struggling to find new offices for the psych department.

Pixie flirts with many guys, and seems to really enjoy teasing them. She was previously involved with Noah Drake until he broke things off with her, though the two of them still maintain a relatively professional relationship at the hospital. Recently she has had a handful of boy toys, primarily the deputy mayor, Thomas Dwayne, and the two of them have been at a stubborn stalemate trying to convince each other to be the one to commit to a relationship. Pixie also has a close flirtatious relationship with Rocky Topps, and it's unclear where things may lead with him. 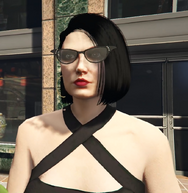